We received an email from the Manager of Amanda Serrano, advising that the current Female Jr. Featherweight Champion, be considered as the Mandatory Challenger for the WBO Female Bantamweight Division. The Committee voted and agreed by unanimous decision.

Therefore, please be advised the parties have fifteen (15) days to negotiate an agreement for the WBO Female Bantamweight Championship bout between Sabrina Perez vs. Amanda Serrano. If an accord is not reached within the time frame, a Purse Bid will be ordered. 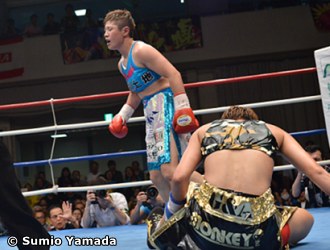 40-year-young WBO female bantamweight champ Naoko Fujioka (15-1, 6 KOs), 117.5, impressively kept her belt when she withstood the opening attack of ex-WBC flyweight titlist Go Shindo (16-4, 11 KOs), 117.75, took back the initiative with her furious retaliation and finally pounded out a very unanimous verdict (98-91 twice and 97-92) over ten grueling rounds on Monday in Tokyo, Japan. It must be Fight of Decade, as our people never saw such a furious give-and-take battle in female boxing history in Japan.

The opening session witnessed Shindo almost toppled the defending champ with a vicious right cross twice, and the crowd sensed that the end would come soon with the challenger victorious, but it was Fujioka that displayed desperate retaliations from the second round onward. Piling up points, Fujioka finally caught up with the game and hard-punching Shindo, taller and bigger than the champ, and floored her with a solid right to the face in the closing seconds of the eighth.