Nietes in toughest fight ever 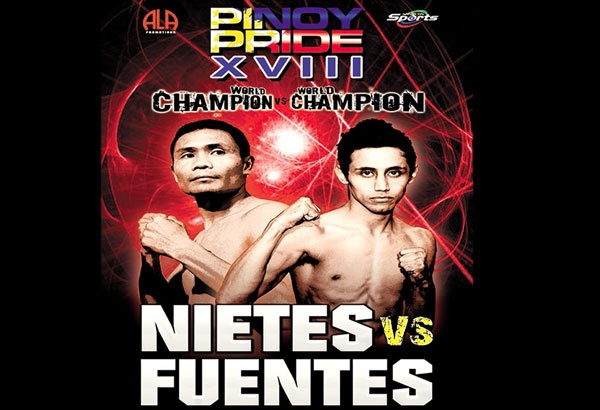 MANILA, Philippines – WBO lightflyweight champion Donnie (Ahas) Nietes has never lost to a Mexican in seven fights and expects to keep his record clean in facing WBO minimumweight titlist Moises Fuentes at the Waterfront Hotel in Cebu City on March 2 but his manager Michael Aldeguer said yesterday it will be the toughest bout in his 10-year career.

The battle of champions will put Nietes’ throne on the line as Fuentes is moving up from the 105-pound division to the 108-pound class. It was previously scheduled on Feb. 2 but postponed for a month. Aldeguer said Mexican legend Marco Antonio Barrera, whose brother Jorge manages Fuentes, had committed to be at ringside if the fight would’ve pushed through on Feb. 2.

“We understand Marco Antonio is checking his schedule and if there’s no conflict, he’ll definitely be in Cebu for the fight,” said Aldeguer. “We’re excited to welcome him in Cebu.” Barrera himself told The STAR last month he was looking forward to visiting the Philippines and calling on his friend Rep. Manny Pacquiao who defeated him twice.

Nietes, 30, is known as the tormentor of Mexican fighters with seven victims in his ledger. Thrice, Nietes repulsed Mexican challengers in Mexico to retain his WBO minimumweight title – a feat unmatched by any Filipino champion. Seven of his last eight victims were Mexican so he has made it a habit to feast on fighters from South of the Border. Fuentes, however, is an extraordinary Mexican fighter and won’t be a pushover for sure.

WBO president Paco Valcarcel of Puerto Rico has assured Fuentes that he will assign only neutral judges for the fight, allaying fears of a hometown verdict. In 2007, WBO superflyweight champion Fernando Montiel of Mexico invaded Cebu to stake his crown against local challenger Z Gorres and came away with a split decision, disproving skeptics who warned of a hometown robbery.

“It will be a hard fight as they are both world champions and it could end in a knockout or a close decision,” said Aldeguer. “This fight means a lot to Donnie. He will be fighting a current world champion who knocked out the legendary Ivan Calderon in his last fight. This is the fight that will define Donnie’s career in going after the bigger names if he gets through Fuentes. I believe that this could be his toughest fight ever.”

Aldeguer said Nietes, who is unbeaten in his last 22 outings since 2004, is leaving nothing to chance in training for Fuentes. “Donnie is training very seriously for this fight as he knows this could be his ticket to fighting bigger names in the future to establish himself as one of the best fighters the Philippines has produced.”

Aldeguer pointed out that Nietes is now the country’s longest reigning Filipino world champion and the second in history to Flash Elorde who was the world junior lightweight king for seven years. Nietes captured the WBO minimumweight crown in 2007 and after four successful defenses, relinquished the throne to claim the WBO lightflyweight diadem in 2011. In all, Nietes has been a world champion the last five straight years. Pacquiao’s world championship streak extended to four years from when he won the WBC superfeatherweight title in 2008 to when he lost the WBO welterweight crown to Timothy Bradley last June.

Fuentes, 27, said he’s not afraid to face Nietes on hostile territory. “Nietes is a very smart fighter,” he told The STAR. “I respect all Filipino fighters, they’re the best next to Mexican fighters. I notice that with Nietes, he starts strong and is dangerous in the first few rounds but he fades in the late rounds and slows down. That is a weakness I will take advantage of. I’ll be working hard (in the gym) to be in the best condition for Nietes.”

Jorge Barrera said he has lined up superflyweights to spar with Fuentes. “I want Moi to spar with bigger guys so he develops more power,” said Barrera. “Moi is already a great Mexican world champion and will be even greater when he beats Nietes.”

Fuentes’ record is 16-1, with 8 KOs compared to Nietes’ slate of 31-1-3, with 17 KOs. The stain in their records was only a slight smudge. Nietes lost a split decision to Angky Angkota in Jakarta in 2004 while Fuentes was beaten by Juan Hernandez, also by a split verdict, last year. Fuentes displayed heart when he recovered from a knockdown in the ninth round to eke out a split decision over Raul Garcia for the WBO minimumweight title in Guadalajara last August. His rise to fame was described as meteoric by the Mexican magazine Box Y Lucha (Boxing and Wrestling) which named him the “the revelation” of 2012.

Fuentes was cited for his one-sided demolition of local hero Calderon in Puerto Rico last October, proving the hometown advantage is a myth. Referee Luis Pabon halted the massacre at 1:22 of the fifth as Fuentes virtually ended Calderon’s 11-year career.