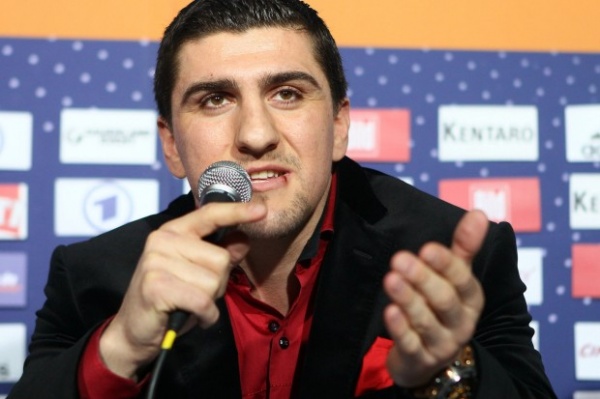 June 8 will see a fast paced and highly entertaining fight at the Max-Schmeling-Halle in Berlin: Current WBO Champion Marco Huck (35-2-1, 25 KOs) takes on Ola Afolabi (19-2-4, 9 KOs) for the third time. The two previous title bouts between them were extremely close and full of action. Currently the reigning champion is in his last preparations of his training camp. In an interview, the prodigy of coach Ulli Wegner gives insights into his fitness and what he thinks of his opponent Ola Afolabi.

Marco Huck, you are currently at a training camp close to the Baltic Sea. How are you feeling?

Marco Huck: I am feeling really good. The surrounding here is ideal for a good preparation. It is just a few steps from the hotel to the gym – and just a few more to the beach. We also have a great spa where I can relax after a hard day’s work. I am getting to my best, which I will be come June 8.

Would you say that preparations are more intense when you are at a training camp?

Marco Huck: Yes, I would definitely say so. You can completely focus on the sport and your goals. Nothing else matters during that time. Everything that could distract you is far away. That enables the coach to get the best out of you.

The fight against Ola Afolabi has been floating around for quite some time now. Different dates for the fight have been mentioned. How did you cope with this situation of uncertainty?

Marco Huck: It was very uncomfortable. The date has been changed on numerous occasions and I have been preparing for the fight since the beginning of the year. It is like if you are stuck in top gear but you are unable to release the handbrake. After everything was finally settled, I was fully focused on the fight and started to look forward to it.

This will be the third time that you square off with Afolabi. How does the knowledge you possess about him influence your training?

Marco Huck: My coach Mister Wegner as well as myself know exactly how to prepare for Afolabi. The main focus during the preparation is on the strategy. Whoever manages to surprise the other one will stand a better chance to win.

Which strengths did you detect during your first two fights with Afolabi? Where do you see his weaknesses?

Marco Huck: He is technically very gifted and has a powerful punch, which I felt first hand. I also know some of his weaknesses but I won’t unveil them before the big night. You will be able to see them come June 8.

How do you deal with the fact that Afolabi always seems to come back? Do you find that frustrating?

Marco Huck: No, not at all. Afolabi is a world-class operator at cruiserweight who fought hard for his position in the rankings. Our first two encounters were very tough and close battles. That is exactly what the fans want to see when they watch a fight. And I want to give them another exciting bout.

Would you say that it is easier to fight someone, who has shared the ring with you before or is it more challenging?

Marco Huck: I would say that it is easier. I doubt that he has developed as a boxer. Therefore, I know that I will cause him some serious problems, which he will not have dealt with during the previous two fights.

Which one of the two mentioned encounters did you like more? The first one from 2009 or the second one back in 2012?

Marco Huck: Definitely the 2009 fight. That was my first title defense of the world championship. I was very motivated and followed my tactics throughout the whole of the twelve rounds. Our rematch in 2012 was a whole different story. I just lost against Alexander Povetkin for the heavyweight crown, which I thought I won. After this disappointing loss I went through a low. That is why I was not able to show my full potential last May in Erfurt. However, that will change dramatically in Berlin. I will be back at my best.

June 8 will be your first fight in Berlin for more than two years. How excited are you to be returning to the German capital?

Marco Huck: I live here and in my opinion Berlin is one of the best cities in the world. It is a great place to live and I feel right at home. That is why I want to put on a good show at the Max-Schmeling-Halle.

Is there a danger of being too motivated going into the fight, as this is your home city?

Marco Huck: I will have to be careful not to get carried away by the reception of the crowd. That being said, normally a good atmosphere gives me some extra strength and energy, which pushes me a bit more and helps me to win. That will probably also be the case on June 8.