Rios vs Alvarado II: Soul-cleansing violence and the blood of boxing 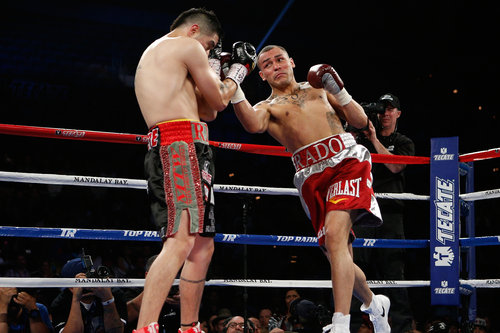 Brandon Rios and Mike Alvarado went to war again on Saturday night, in a display of everything that keeps old boxing fans hanging around, and can make non-fans believers in the brutality of the sweet science.

There was a spot just behind the forward-leaning right glove of Mike Alvarado’s guard that, in the earliest rounds of Saturday night’s contest, may as well have had a bullseye painted on it.

His opponent, the heavy-fisted, iron-jawed Brandon Rios, aimed his left hook at that spot every time he was close enough, and one couldn’t help but wince every time he torqued it around Alvarado’s hand with brutal affect. He hurt Alvarado badly with a stiff jab in the second, and for a minute it looked like the fight might end earlier than it did the first time the two met in October of 2012, when Rios stopped him in the seventh.

“Mile High Mike,” as the Denver-native Alvarado is called, would not be so easily dispatched, though. Smiling and grinning through the worst of Rios’ barrage – whistling in the dark, some might say, but still – he came back in the later rounds, moving and boxing with the clean footwork that gave him his best (and maybe, only) chance at beating the fearsome puncher.

His movement confounded Rios, kept him off-balance, and wouldn’t let him land anything more than a one or two-punch combo. No combinations meant few openings. Few openings meant that Rios’ city-wall-shaking left hook stayed in its holster.

All the while, Alvarado strafed him with Diego Corrales-style looping right hands that whipped the Californian’s head to-and-fro and dragged attention away from his own face, which was a swollen, bloody mess by the final bell.

One wound up with the interim WBO super-lightweight belt. Both went to the hospital. Neither had serious injuries. Everyone – and I mean everyone – won.

Too many times do boxing fans (casual or otherwise) walk away from a much-hyped fight with a sense of disappointment, a lackluster apathy that drains the energy from a sport built solely upon the electricity inherent to a good brawl. Too many times do we fork over too much money to watch men who care too little move too much and take too few chances. But once in a while, we’re reminded why we love it. Saturday night was why we love it.

Welterweight champ Timothy Bradley put it succinctly afterwards when he called the affair a “bloody war” that saw “both fighters put their lives on the line.”

It wasn’t just hyperbole. When a man’s face – inflated with blood and decorated with a scalpel cut over the left eye that looks like it’s going to make the whole thing burst – looks like Mike Alvarado’s did, and when you see Brandon Rios take flush shots that would lay low lesser men, have no doubt that there are indeed lives on the line.

It was all of the black beauty of this sport, rolled up into one night. And boxing, which so often likes to jam its own hand in the garbage disposal just because it feels so good when it stops, didn’t fuck it up. No $70 pricetag, no anti-climactic ending, no shaking your head at 12 a.m. and wondering, “Why do I even watch?”

Fights like this are the lifeblood pumping through every vein of the sport. They lend inspiration to every amateur who spends his Friday night with his head tight against the side of a heavy bag instead of a bottle of whiskey, every kid shadowboxing in the mirror pretending he’s Rocky. They create new boxing fans instead of disgusting the old ones, and build legends instead of destroying them.

And we cannot forget that men like Brandon Rios and Mike Alvarado are the ones who make this sport what it is, even when “what it is” might not always seem clear. It’s not Floyd Mayweather and his rap sheet or Manny Pacquaio and his swarms of hangers-on, not David Haye and his bluster or Wladimir Klitschko and his overwhelming … prudence. It’s the simple, brutal violence that cleanses the soul and reminds us just how brave some men are.

There will, inevitably, be a rubber match between these two; after 19 rounds of carnage, it’s only right that it, of course, happen again. When it does, take a second to truly appreciate the lengths to which these men are going to in the name of sport and victory; not many will willingly hasten their own deaths by fighting with reckless abandon and declaring, “Fortune, it is you I follow!”

In reality, that’s what these two are doing. And we the fans are lucky to be watching.