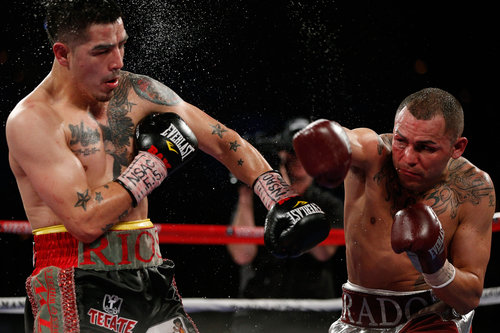 Mike Alvarado handed Brandon Rios his first official loss as a pro, winning the decision in tonight’s thrilling rematch from Las Vegas. Fight three is no doubt on the way.

ke Alvarado defied the odds tonight, not just winning a rematch with Brandon Rios, but doing so over the 12-round distance, in a brutal fight that topped their October 2012 bout with better boxing on both sides, and an incredible display of grit, heart, resilience, and fortitude.

For Alvarado (34-1, 23 KO), it was the fight of his life. He said he’d box more, which he did, and did very well, but that doesn’t mean he wasn’t there to trade. He ripped Rios (31-1-1, 23 KO) with right hands all night, finding a consistent home for the shot after getting wobbled by the confident and aggressive Rios in the first round.

Back and forth they went, toe-to-toe, with Alvarado making major adjustments from the first bout, using his footwork and giving Rios a lot more work than the first time around, as the Oxnard slugger wasn’t able to be right on top of his foe this time.

Both guys ate big shots from the other, but Alvarado seemed to land the bigger and more frequent telling blows. Rios wasn’t able to totally get into his rhythm on the inside, where he’s a pure destroyer, and Alvarado was able to keep some distance, winning the fight nicely with that bit of range.

Rios fought a really, really good fight tonight, it must be said. He looked lighter on his feet, and his defense was better than in October. But Alvarado was on a level we’ve never seen from him tonight, and he was the better man.

There is really no doubt that there will be a third fight between the two. Unless Alvarado could fight Manny Pacquiao or Juan Manuel Marquez out of this one, there’s nothing bigger for them, and we know for a fact that Rios-Alvarado is a hit in the ring. Somehow, they topped their first fight. Could they go to yet another level in a third bout?