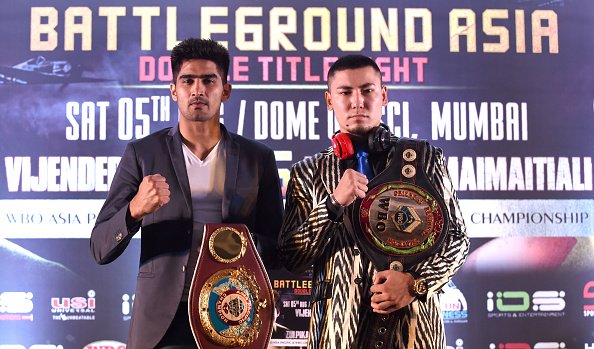 ‘Battleground Asia’ will also see participation from other boxers apart from the Beijing Olympic trio, WBC Asia Welterweight Champion Neeraj Goyat who will be looking to defend his title belt, the other joining the fight card are Pardeep Kharera, Dharmender Grewal and Kuldeep Dhanda. The 26-year-old boxer from Haryana, Neeraj Goyat made his professional debut in 2011 against Gou Wen Dong in China. He has fought 12 bouts with an experience of 71 rounds under his belt and claimed 8 wins, with 2 Knockouts. The Indian is currently placed 35th in the WBC list which was updated after his victory over Australian Ben Kite, who he defeated to retain his title. In 2016, he had won bronze medal in the AIBA Pro Boxing Olympic qualifier.

WBC Asia Welterweight Champion Neeraj Goyat will be looking to defend his title in a 10-round fight against Allan Tanada of Philippines in the Welterweight category (66.7 Kgs). Neeraj will be facing a much-experienced boxer, Tanada who made his debut in the year 2008 and has played 24 bouts since then with winning 15 of them including 7 KO’s, and has 137 rounds under his belt.

An enthusiastic Neeraj Goyat spoke on defending his title belt, “I have worked very hard for this belt and this belt means a lot to me. I am not going to let anyone take it from me. I am putting in a lot of labour and muscles to make sure that the belt remains with me on 5th August 2017. Yes, my opponent is more experienced but that does not mean I will let go of my belt that easy, I will give him a tough fight.”

The 21- year old Pardeep Kharera comes from a small district in Haryana. Pardeep turned pro last year in February, till date he has 3 bouts with 11 rounds under his belt. Pardeep, will face Wanphichit Siriphana of Thailand who debuted in the year 2014 and has fought 3 bouts since then. Siriphana has played 15 rounds, he has won 2 bouts out of the 3 that he has been a part of. Pardeep will face him in a 6-round contest in Welterweight category (66.7 Kgs).

Dharmender Grewal turned towards professional boxing in April last year and has fought and won 2 bouts since his debut, with one resulting in a Knockout win. He will face Isaac Slade of Australia in a 6-round contest, in the Cruiserweight category (90.7 Kgs). Isaac debuted in the year 2015 and has been a part of 3 fights with 15 rounds. However, he has won only 1 bout with KO, the other two resulting in loss and draw respectively.

Haryana boy Kuldeep Dhanda, 27, who turned professional in April last year in the light weight category made a good start in his career winning 3 out of 3 bouts. In this fight night, he will face Sachin Bhot in a 4 round contest in the Lightweight (61.2 Kgs) category. Sachin has previously played two bouts with one resulting in his favour the other against him