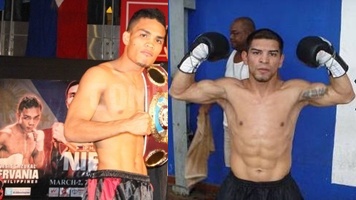 Revenge is on the mind of undefeated WBO “Best Boxer of the Year” and the reigning WBO Asia Pacific super bantamweight champion Genesis “Azukal” Servania when he faces Panama’s former WBA super flyweight interim champion Rafael “El Torito” Concepcion for the WBO Intercontinental title at the Waterfront Hotel & Casino in Cebu on Saturday.

The “Pinoy Pride XXII” card staged by the famed ALA Promotions in partnership with the giant broadcast network ABS-CBN will be telecast on The Filipino Channel with a delayed telecast at 10:15 a.m. on Sunday over Channel 2.

The bad blood between the cocky Concepcion who scored a stunning 10th round knockout over fancied  AJ “Bazooka”  Banal on July 26, 2008 and has vowed to give Servania an even more humiliating defeat resulted in a fierce exchange of words during a post weigh-in stare-down at the Ayala Activity  Center Friday,  forcing GAB official Celso  Miranda to step in and separate the two fighters.

Concepcion annoyed Servania when he offered him a blue pillow taunting the Filipino prospect by claiming he would put him to sleep early.

Servania promised to make Concepcion eat his words and adding, “I trained hard for this fight and will make him eat his words.”

Boasting that Mexicans are the best fighters in the world, Martinez asked Villanueva to take a look t his fists because it would be the last thing he would see.

Villanueva reacted calmly and indicated he will let his fists do the talking in the ring. Rated by all four major world boxing organizations, Villanueva is hoping that an impressive showing against Martinez will help line him up for a wold title shot.