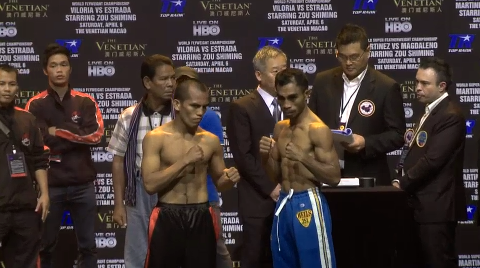 The card will be headlined by the WBO/WBA flyweight title match between Brian Viloria of the Philippines and Juan Estrada of Mexico.

Melindo spoke to CDN before the start of yesterday’s press conference at the Venetian Hotel in Macau.

“I haven’t seen my opponent up close yet but I have seen videos of his fight,” Melindo said. “I’m ready and this will be a good fight.”

Melindo is ranked number one flyweight by the WBO while Seran is the reigning WBO Asia-Pacific light flyweight champion.

This huge fight card promoted by Top Rank will be held at the Cotai Arena in Macau this Saturday.

Melindo vs. Seran, Viloria vs. Estrada and Shiming’s pro debut against Mexican Eleazar Valenzuela will be shown on ABS-CBN on Sunday April 7 at 10 a.m. Philippine Time. /Correspondent Rene Bonsubre Jr.