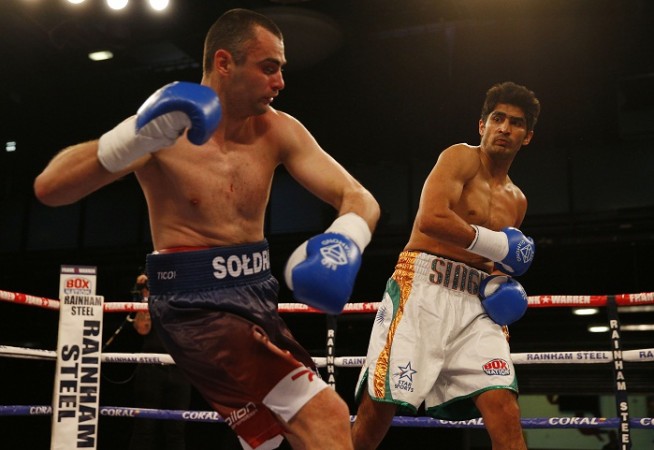 Boxing fans in India will finally get to see Vijender Singh throw his massive punches and jabs as a proefessional as he will make his home debut against Kerry Hope from Australia for the WBO Asia-Pacific Middleweight title next month in Delhi. Vijender is excited about the fight and looking forard to make an impact

Though Vijender is undefeated in his pro career so far, this fight against Hope could prove to be his biggest challenge. Hope is an experienced fighter, with 30 bouts under his name, and has been involved as a pro for more than a decade.

Vijender is quite new compared to Hope as the Indian boxer has only fought six fights, with his first one coming just in October last year. However, he has already earned a name for himself after an impressive start to his career, which helped him land this WBO Asia-Pacific title shot as well. Vijender has defeated all his opponents via knockout so far.

“I want to say this is just the beginning. It is only 6-0 at the moment. In the future, when it becomes 60-0, I will consider it as an achievement and I will feel that I have achieved something big,” Vijender told rediff.com in an interview.

In order to have a great professional career, he needs to be on top of his game and maintain high level of fitness for years to come. The Indian boxer has the skills, but he needs to execute it as per plan, and use his strengths accordingly. Vijender needs all sorts of planning and skills to defeat his next opponent, Hope, who will depend on his experience to hand Vijender his first defeat.

“Of course, it will be a tough fight because my opponent has a lot of experience. I also have experience even though it is as an amateur. Boxing is boxing! I have seen his fights on Youtube and watched him closely and studied how he fights. I will face him in the ring and will give my best to get the better of him,” Vijender said.

Indian boxing fans are expected to come in huge numbers to support Vijender at the Thyagaraj Stadium in Delhi for the fight. The 2008 Olympic Games bronze medallist will be keen to put up a major show, defeating Hope and winning his first professional title.

Though Vijender is excited about his homecoming, the boxer will also be under pressure to deliver.

“It is a very big fight for me next month. It will be my first homecoming fight and I will be fighting for the Asia title. I am really excited to fight in front of my fans in India. It will be a great fight night and I am sure the title will be mine. I am giving my 100 percent in training because I want to win that bout and win it for my fans,” Vijender said.

“There will be some pressure, but there is excitement as well. It will be my first fight in India.”