SABILLO WILL GIVE HIS BEST SHOT IN WBO INTERIM TITLE FIGHT 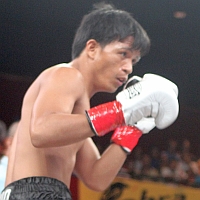 Courageous Filipino southpaw Merlito Sabillo has said he will do his best to bring home the WBO minimum weight Interim championship belt when he battles Colombia’s Luis de la Rosa in their title fight at the Coliseo Mario De Leon in Cerete, Colombia on Saturday (Sunday in Manila).

Sabillo who is ranked No.2 by the WBO told Anson Wainwright of MaxBoxing that he is “excited and have prepared myself mentally, physically and emotionally. The fact that we have to travel halfway across the globe for this fight is quite overwhelming but if that’s what it takes, we will be ready. I am very focused now on the work ahead and I know the importance of the matter at hand. That is why I will work very hard and give my best to bring home the championship belt to my country, the Philippines.”

Sabillo said he “learned the value of hard work and how important it is to make the most of a chance that is given to you. I guess that is why I am more determined now, more than ever, to prove my worth as a boxer.”

The undefeated Oriental Pacific Boxing Federation champion responded to No.1 ranked De La Rosa’s claim that he is “the champion without a belt” saying he felt he defeated Raul “Rayito” Garcia on October 30, 2010 when he lost by a twelve round split decision “but the judges didn’t see it my way.”

The Colombian fighter who has a record of 21-1-1 with 12 knockouts said “this time I will stop Sabillo and won’t leave it in the judges hands.”

Sabillo said “I respect the other fighter’s will to be a champion but I also intend to do the same. I only want to say that I have prepared extensively going into this fight. I worked very hard to be at this stage in my career and I am hungry for a championship. I respect the other fighter’s desire to win but I am more determined to do the same. There can only be one champion out there.”

ALA Promotions president Michael Aldeguer told the Manila Standard that Sabillo who is facing his first fight abroad after a long and grueling flight from Cebu, “has guts and is all heart” and he is hoping it will help him win and possibly set up a title fight against reigning champion Moises Fuentes who last Saturday dropped a majority draw decision to light flyweight champion Donnie Nietes in a close and exciting title bout.

Sabillo was accompanied by trainer Edito “Ala” Villamor and former OPBF champion and world rated bantamweight contender Michael Domingo who is his trainer.