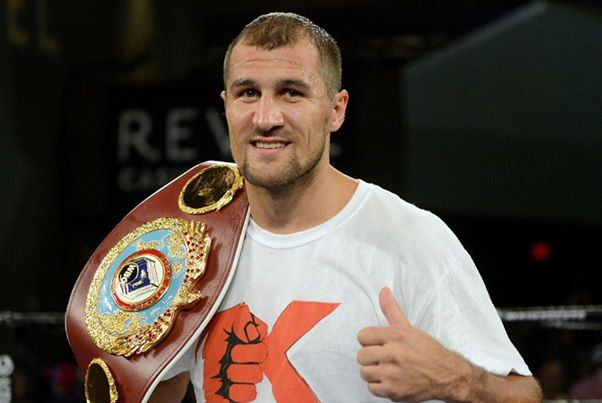 LAS VEGAS, NEVADA – World Boxing Organization (WBO) Light Heavyweight campion, Sergey Kovalev, was awarded tonight as the Fighter of the Year at the Gala Dinner of the WBO 27th Annual Convention, which were honored former WBO champions and International Boxing Hall of Fame Inductees Joe Calzaghe and Oscar de la Hoya, in an event el at the Caesar’s Palace Resort and Casino in Las Vegas.

The 27th Convention ended this evening with an emotional ceremony honoring the careers of Calzaghe and De La Hoya, who were present to receive the tribute.

“We want to honor these two great champions WBO and now immortal Hall of Fame International Boxing Calzaghe and De La Hoya, always faithful to our body and two of the best of his era and history,” said WBO president Francisco “Paco” Valcarcel.

After a video with part of their most important bouts, the fighters were introduced by the famous ring announcer Jimmy Lennon Jr., who served as master of ceremonies of the activity. Both former world champions got a special WBO belt in honor of their careers.

Meanwhile, Kovalev, who will defend his 175 pounds WBO belt on November 8 against also world champion Bernard Hopkins in a unification bout, won his belt in August 2013 and has successfully defended three times with KO wins over Ismayl Sillah, Cedric Agnew and Blake Caparello.

Other winners on the night were the promoter Bob Arum, who received the WBO Promoter of the Year award, the fight between WBO Lightweight Champion Terence Crawford and Yuriorkis Gamboa as the WBO Fight of the Year, the WBO featherweight champion Vasyl Lomachenko as Fighter with Brightest Future, while the WBO female bantamweight world champion Carolina Duer was awarded with the WBO ring for her 10 defenses of the title.