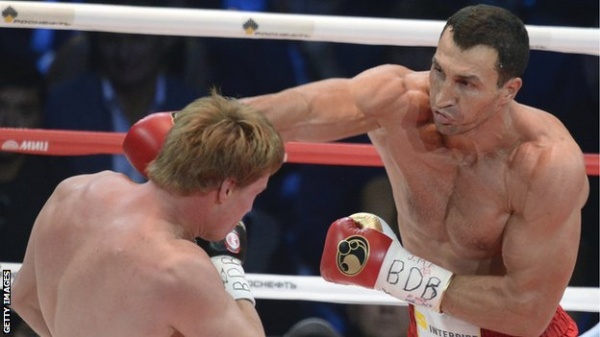 Russian Povetkin, who was unbeaten before the fight, was put down on three occasions in the seventh round and never really troubled the champion.

Tale of the tape

Klitschko has made 15 defences in his second spell as champion and has won 61 of his 64 professional fights.

“That was a tough bit of work, he’s a real fighter,” said Klitschko.

“I kept landing the punches, but he stayed in there.

“I believe it was a deserved win, but I think I can improve still.”

Klitschko quickly established his dominance and put Povetkin down with a short left towards the end of the season round.

With Klitschko’s jab working well, the challenger struggled to get close and was never able to build momentum.

Klitschko produced a fierce onslaught in the seventh, sending the Russian to the canvas on three occasions, although he looked to have pushed Povetkin over for two of those.

Seemingly content to coast through the rest of the fight, Klitschko was docked a point for once again throwing Povetkin to the ground in the 11th round.

Povetkin continued to battle, even after the final bell, but Klitschko’s victory never looked in doubt.

“Things didn’t quite go as well as I wanted, but I never give up,” said Povetkin.

“Of course, he was the better fighter, he’s the best in the world, that’s clear.”