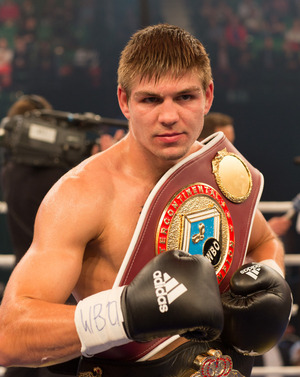 Team Sauerland has announced a long-term cooperation with Vincent Feigenbutz (14-1, 13 KOs), one of German boxing’s most exciting young talents. Having turned professional at the tender age of sixteen, the Karlsruhe-based super middleweight has built a reputation as a fearsome puncher. Said promoter Kalle Sauerland, “The power this young man boasts is scary. With his power and aggressive fighting style, he has the makings of a real fan favorite.”

The nineteen year-old’s explosive knockout power will be on display again on September 27 at the Sparkassen-Arena in Kiel, Germany. An opponent for Feigenbutz, who is going to defend his WBO Intercontinental title, will be announced shortly. In the main event, WBO super middleweight champion Arthur Abraham will try to fend off another challenger in Paul Smith.