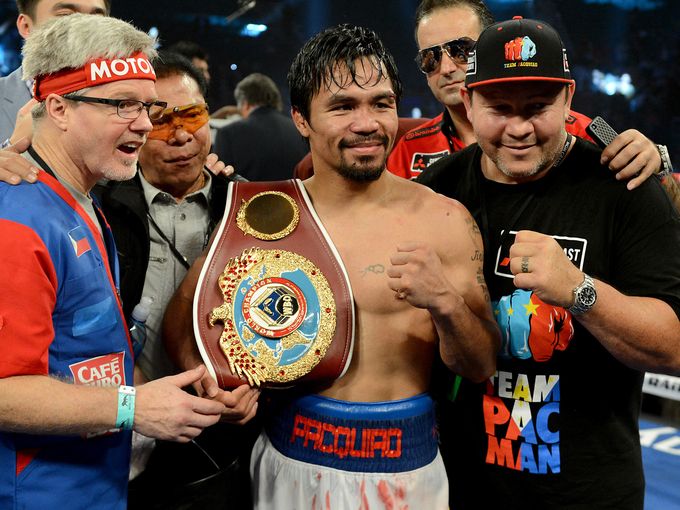 Boxing legend and Senator Manny Pacquiao returns to the Philippines on August 24 as he takes a timeout from breaking records inside the ring to promote a world title bout.

‘Pacman’ who delivered a stunning performance against the previously undefeated Keith Thurman in July, is staging the fight under MP Promotions alongside Sean Gibbons.

The welterweight titleholder will host a mouth-watering showdown between two-division king John Riel Casimero and Mexico’s Cesar Ramirez in Manila.

The Filipino won the WBO Interim Bantamweight strap in his most recent fight after inflicting a KO defeat to Ricardo Espinoza. Casimero, a fellow compatriot of Pacquiao, knows a victory will see him become mandatory challenger to WBO titlist Zolani Teti. ‘Quadro Alas’ has won three successive contests since returning to the ring in 2018. He has won IBF world titles at light-flyweight and flyweight, respectively.

The 29-year-old started preparation with eight-weight ruler Pacquiao in LA. He is currently training at the MP Stable in Davao City under Nonoy Neri. Casimero aims to continue his charge on the bantamweight division. He faces a stern test in Ramirez, though, who is ranked inside the top 10 of the WBO rankings. Since tasting defeat to former unified world champion Ryan Burnett, the Mexican is on a six-fight winning streak, with five inside the distance.

The Manny Pacquiao Championship Boxing event will see another intriguing duel at 118lbs as Vincent Astrolabio takes on Kevin Aseniero. The bout is an all-Filipino battle for the WBO Oriental belt in the co-feature of the evening. This is a show not to miss and it all goes down on August 24 at the San Andres Sports Complex in Manila on August 24.