Terence Crawford Continues His Rise To Stardom With TKO Of Dulorme 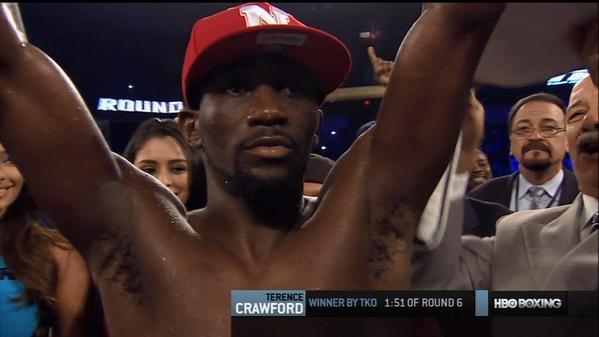 Crawford — the man Bob Arum refers to as the next big thing in boxing — won the vacant WBO junior welterweight title with a sixth-round technical knockout Saturday night, knocking down Dulorme three times in quick fashion after a slow start.

Crawford remained undefeated — in his first fight moving in the 140-pound class. He won the WBO lightweight title 13 months ago and defended in the 135-pound division twice in his hometown of Omaha, Nebraska.

Crawford is scheduled to be in New York to accept his 2014 fighter of the year award from the Boxing Writers Association of America this coming week.

Crawford came out slow — feeling out Dulorme — who entered the ring wearing a gladiator helmet and breastplate.

The action sped up a bit in third round — with Crawford grwoing in confidence because Dulorme could never hurt him. By rounds four and five — Crawford taunted him, and at the end of the fourth had him back into a corner and delivered two big rights.

“Just having fun with it,” he said. “When I’m having fun, I don’t think nobody can beat me because that means I’m in my rhythm.”

Arum this week called Crawford a new superstar on the horizon, and said this fight was a “very, very crucial first step” towards becoming an elite fighter.