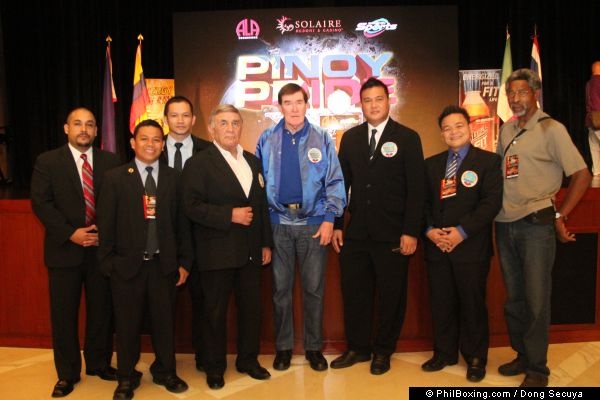 No less than the biggest boxing promoters in the country are in agreement that when it comes to holding the biggest and the best events, officials of the World Boxing Organization (WBO) in the Philippines and elsewhere in Asia are at par with the best anywhere in the world.

This was nowhere more evident than during the “Pinoy Pride XXI” event at the plush Solaire Resort and Casino, where the WBO once again had a big night with two title belts being put at stake for the mega boxing promotion.

WBO Asia Pacific chairman Leon Panoncillo, who single-handedly brought the WBO in Asia into the world, takes much pride in his officials, indicating the high level of professionalism attained by the officials all through these years.

This is the same professionalism that has earned the respect of ALA Promotions, the country’s biggest promoter, as the WBO officials are noted for the amount of improvement they have racked up since the first edition of Pinoy Pride series.

“I commend you for arriving on time for the weigh-ins and rules meetings. I know you are busy in your respective fields, but you really take the time to join each rules meeting and you dress the part,” said Panoncillo, noting that WBO officials are always prim and proper during meetings leading up to fight night.

WBO Asia chairman Leon Panoncillo also makes sure everything is in order before each fight, making sure all purses, sanctioning fees and officials’ fees are turned in before the first bell. This is a far cry from stories we hear of fighters and officials not getting paid in other organizations.

Even ABS-CBN, which covers the ‘Pinoy Pride’ series and the biggest television network in the country, are apparently impressed with how the WBO runs shows in the country. Veteran sportswriter and commentator Ronnie Nathanielsz always notes how the officials score fairly and conduct themselves in the right manner.

As it is, all these is a result of long years of improving and having a keen understanding of the sport, said Panoncillo.

“We could not have done this without the support of credible promoters like ALA Promotions and leading network like ABS-CBN,” the WBO exec said.

In the Philippines, the WBO boasts of two officials who are licensed by the Association of Boxing Commissions (ABC), regarded as the universal organization for boxing. International boxing judge Salven Lagumbay was the first Filipino to earn an ABC certification, followed by international referee Danrex Tapdasan. International judge Edward Ligas is also a regular WBO Convention attendee, just like Lagumbay and Tapdasan.