WBO Champion Jack Catterall: “Nathan Brough was the same size as Mckenna. what happened to him? left snoozing!” 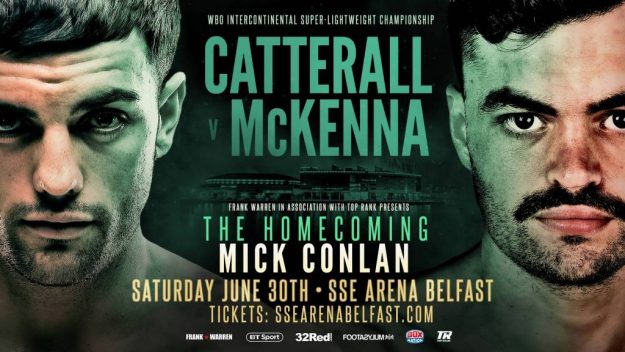 If unbeaten ex British light-welter king Jack Catterall has any shortcomings as he storms towards a world title shot, lack of self-belief is clearly not among them.

The power-packed Chorley southpaw is currently ranked fifth and rising in the queue to face WBO boss Maurice Hooker from Dallas. However, this weekend, ‘El Gato’, still only 24, gambles all against a much avoided 6ft 1in southpaw, performing in their home city.

‘Beating Tyrone in his own backyard will just make the victory so much sweeter,’ quips the clearly non-plussed Lancastrian who has eliminated all 21 prior pro opponents, stopping a dozen (often in spectacular fashion!)

‘I’ve never been to Belfast so that’s a new experience but I’m very aware of how hostile the Fighting Irish crowd is. I don’t particularly want any cups of p*** chucked over me but I’m actually excited by experiencing their passion. They’re a proper fight crowd who’ll make a lot of noise and, whether that’s for me or their man Tyrone, it’s a good thing.’

It isn’t just the crowd that Catterall will need to conquer. ‘Bones’ McKenna is a six-time All-Ireland amateur champion and Junior Olympic medallist who has also swept all before him since shedding his singlet.

‘I’ve studied Tyrone a great deal yet I’ve never seen him in a fight against anyone good enough to cause him problems,’ claims the Jamie Moore coached, MTK Global managed bulldozer who flattened both of his previous 2018 opponents inside the opening frame.

‘We’ve been working on stuff we need to combat and expose the flaws McKenna’s known to have. He seems to keep his hands low yet his past history suggests that he’ll come to slug. Against me, that’s the wrong thing to do. Even if he TRIES to box me, he’ll soon return to type. I’ll not have to go looking for him.’

Just 5ft 7in on his tiptoes, Catterall might require a step ladder to locate McKenna’s whiskers but he has always exhibited a relentless and remorseless body attack.

‘I’ve never been the tallest for my weight so I’m used to conceding. Anyway, Tyrone doesn’t make the best of the (physical) advantages he enjoys. He’s no Bradley Skeete. The way Tyrone fights, he’s not the hardest to find. Besides, Nathan Brough was the same size as Ty and what happened to him? Left snoozing! (Catterall iced the World Junior medallist with a single left hand back in 2014).

‘And I’ve beaten several southpaws before. Tom Stalker was a southpaw (stopped in eight). All our preparation has been geared towards southpaws. That said, if Tyrone was foolish enough to come out orthodox I’d quickly adapt. That’s one of my best qualities.

‘I’ll not be remotely concerned about what McKenna tries to do. I’ll go into the fight and establish myself. He can react to me. If he wants a phone box war, he’ll get one. I’ll be too strong, too powerful and once I land one on his whiskers, he’ll not want to engage.

‘I’m fit and ready for 10 very hard rounds. I’m not daft. I know I’m not Gennady Golovkin and you have to have a strategy. But there’s a good chance I’ll stop him.

‘I’ll need to put on a masterclass to beat a Belfast boy in Belfast and that’s exactly what I intend to deliver.’

TYRONE McKENNA: “IF CATTERALL WANTS A WAR, WE WAR!”

‘Hooker v McKenna. Freak against Freak! I’m just concentrating on Saturday but, yeh, let’s bring ‘Mighty Mo’ to Belfast. He’s definitely beatable,’ states the 6ft 1in southpaw – known as ‘Bones’ – who is unbeaten in 17 (one TD) since kickstarting his pro innings on the US East Coast back in August 2012.

‘Once I beat Catterall and establish my name, I want the big fights as soon as possible. I’ve been pleading for these types of fights for a while. I’m ready to take on the world!’

Eight months back, the former six-time All Ireland amateur king was still to venture beyond round six in a slow burning career. However, subsequent gritty and educational 10 round wins over French nugget Renald Garrido and 17-1 city rival Anthony Upton have plugged the gap.

‘You could throw a stone from my garden and hit Upton’s house so there was a lot of west Belfast pride involved; a bit of needle. There’s no way I could’ve shown my face around here, if I’d lost to him,’ says the swift and slingy sharpshooter.

‘Anthony is a tricky, sharp switch hitter, a very good boxer but, on the night, he just wanted to move. It was a bit frustrating because I trained very hard and sparring went unbelievably well. Still, I demonstrated a bit of power to drop him in the ninth and won comfortably enough on the cards. It told me a lot about where I’m at, in fighting terms. He’d beaten me in the amateurs but I got my revenge where it mattered.’

Nevertheless, the crossroads clash against 21-0 ‘El Gato’ Catterall, ranked #3 by the WBO, represents another sizeable step-up.

‘Basically, I’ve had to step in because that mouthpiece Ohara Davies didn’t have the balls. One hundred per cent Davies can have it next, after I win on Saturday. I’ll gladly end his career,’ says the 28 year old Ulsterman who is managed by MTK Global and coached by Danny Vaughan in Glasgow.

‘Jack and I have sparred in the past and we get along, talk quite often on social media. As a fan, I enjoy watching him fight. He’s always entertaining and he’s a solid all-rounder. It’s sure to be a tough night for me.

‘But it’s a test I’m more than ready for. Since switching to Danny two years ago, I’ve grown as a fighter. He’s got me training very hard and eating right. My defence is much improved and I’m finally sitting down on my punches.’

The odds setters enlist McKenna as a generous 4-1 outsider, remarkable given that the southpaw enters with a six inch reach height advantage and enjoys home court……and there’s no home advantage quite like a Belfast home advantage!

‘The size differential makes no difference. I have to punch down but I had well over 100 amateur contests and encountered every style and size. Some highlight that I’ve ‘advantages’ but I’ve never been in the boxing game to jab and move. I love to entertain the fans,’ claims ‘The Mighty Celt’.

‘Boxing a fellow southpaw won’t be an issue either. I’ve done most of my sparring with Tom Stalker, Jono Carroll and Sam Maxwell, who switches. Sometimes I prefer a southpaw for a change.

The collision with Catterall represents Tyrone’s sixth successive start in the Ulster capital.

‘There’s zero pressure on me. Jack holds the belt, he’s the odds -on favourite, he’s the one saying I’m ‘easy work’,’ he says.

‘I’ve fought before at the Waterfront and SSE in Belfast and the fans give you a big, big drive. Our fight is likely to be just before Mick (Conlan)’s big homecoming so the hall should be rammed and I guarantee it’ll daunt Jack Catterall. I believe it’ll affect his performance and inspire me.

‘I’m fit and ready to rumble. If Catterall wants to war, we war!’ He’s talking of making it a hat-trick of one round wins in a row so maybe he’ll steam out for an early ‘kill’. However, if he tries to box instead, I’ll outsmart him. I’ve far greater amateur experience and I’d pitch my boxing brain against anyone else’s in the division. Either way, baby!

‘Jack says he’s not underestimating me but he keeps talking about future fights with Ohara Davies and Maurice Hooker. Hold on …..! First, he’s got to get past a 6ft 1in southpaw who’s a nightmare for any one.

‘I’ve faster hands, faster feet and think speed will be a key factor. With 8oz gloves on, a stoppage is possible. I won’t be looking for it, but I certainly punch hard enough. If I execute my game plan, I expect it to be a comfortable night for me.’

Tyrone McKenna is ready to ride a wave of fanatical home support to victory over world-ranked Jack Catterall in Belfast on Saturday.

McKenna (16-0-1-KO6) and WBO Inter-Continental Jr. Welterweight Champion Catterall (21-0-KO12) put their unbeaten records on the line at The SSE Arena on the undercard of Michael Conlan v Adeilson Dos Santos and although an underdog, McKenna is brimming with confidence.

‘The Mighty Celt’ said: “He said I wasn’t his toughest test and he can believe what he wants to believe. He’ll be unpleasantly surprised.

“I know it’s a tough fight for me but I don’t think he knows how tough it’s going to be for him. We’ll see on the night.

“Taking me at four weeks’ notice isn’t a smart move by him. He’s not faced a tall southpaw like me. I’m not a standard fight.

“I’m well supported in Belfast and it’ll be electric on the night. All Michael Conlan’s fans are my fans too because I’m good friends with him. Everyone will be behind me and it’s going to be very, very loud.

“This is it for me. This fight will make me a star. I’ll show everyone in the UK and Ireland just how good Tyrone McKenna is. It’s a stage I’ve wanted for years and I’m going to shine.”

News of Sutcliffe Jr’s withdrawal was quickly followed by confirmation that Lancastrian Catterall (21-0, 12 KO’s) will put his WBO Intercontinental belt on the line in a colossal bout with McKenna (16-0-1, 6 KO’s) at The SSE Arena.

Far from complaining about facing such a high-quality replacement at four weeks’ notice, home fighter McKenna has welcomed the opportunity to pit his wits against a former sparring partner.

McKenna said: “When I heard Sutcliffe Jr was out again my heart sank but then I was told Catterall was in and it’s amazing. I’ve wanted that fight for 18 months.

“It’s extra motivation for me in camp now. Catterall is a massive name. I sparred him and I speak to him so I know what he brings to the table.”

Catterall is equally excited to be on another big stage after his recent outing at Elland Road ended in an underwhelming early victory, when opponent Christopher Sebire appeared to sustain a shoulder injury.

Catterall said: “I’ve only had two rounds in the ring this year but I knew sooner or later I would be involved in a big fight. I was expecting a different opponent but this makes perfect sense.

“I fought just two weeks ago and it wasn’t much of a fight so this is brilliant. I’m in shape anyway and Tyrone was training. Both camps and both fighters want it and that’s great to see.”

Tickets for The Homecoming are available to purchase now via www.ssearena.com