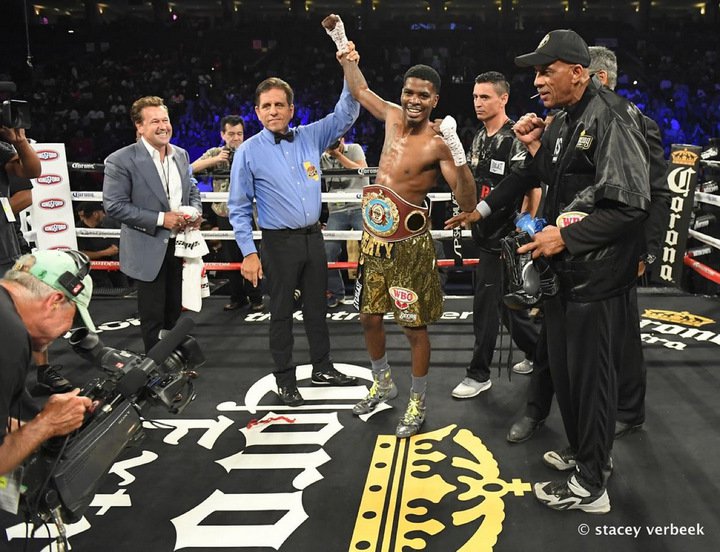 Super Lightweight champion Maurice “Mighty Mo” Hooker (21-0-2, 16 KO’s) from Dallas, Texas returned to Oakland and rocked Ty Barnett (23-5-1, 15 KO’s) with a stiff right hand in the opening moments of the first round to the thunderous applause and excitement of the boxing fans in attendance at the ROC NATION/HBO fight card at Oracle Arena this past Saturday night. As the first round continued, Barnett was moving to his left with his back to the corner, and Mighty Mo tagged him with a stiff left hand jab that snapped his opponent’s head back. As they moved in the middle of the ring, the champion landed his signature straight right hand that buckled Barnett’s legs and he retreated to the ropes.

Mighty Mo then moved forward and landed two lightning left hooks that backed his opponent up and then he landed a powerful left hook that buckled Barnett who landed against the ropes and attempted to hold onto the champion to save himself from going down. In the next second, Mighty Mo landed another huge left hook and a right hand that put Barnett down to the canvas that brought the audience to their feet around the Oracle Arena. Barnett took a knee as the referee made the count and then the fight continued.

As he danced around the ring waiting for the eight count to end, and sensing an early finish, Mighty Mo stayed composed as the fight continued. He quickly and cautiously went after Barnett and landed numerous left hooks and several overhand rights right in front of Bernard Hopkins who was a ringside commentator for HBO, along with Jim Lampley and Max Kellerman. After several more stiff jabs Mighty Mo landed a huge right hand that snapped Barnett’s head back against the ropes and the referee stepped in to stop the fight with the official KO at 2:17 of the first round. I was told before the fight by Mighty Mo that it would not go past five rounds and another prediction rang true. Because of his long training camp, he came into this fight with exceeding confidence and continued his undefeated winning streak and the defense of his WBO/NABO Super Lightweight title for his return to Dallas, Texas. At ringside, when I asked him, “How did you feel when you first touched him in the first round, he laughed and said “I knew it was over with, and he was in trouble.” He went on to say “I stayed relaxed and knew my knockout was coming and I am ready for anybody.”