“TO BE A CHAMPION, YOU HAVE TO GO TO THE HOUSE OF THE CHAMPION” – RODRIGUEZ 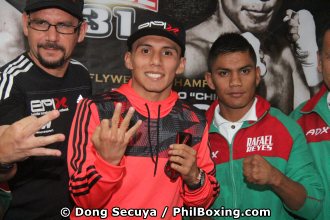 CEBU CITY- Mexican challenger Francisco “Chihuas” Rodriguez is back in Cebu and he did not mince words when asked about the defending champion Donnie “Ahas” Nietes.
“I had a bad experience the first time I was here. But now I am back, better and well prepared. I plan to knock him (Nietes) out,” This was Rodriguez’s initial salvo during the press conference held Wednesday afternoon at the Rajah Park Hotel. Rodriguez (17-2-1,11KO’s) referred to his fight last November when he engaged Jomar Fajardo to a split draw at the Waterfront Cebu City Hotel. He had to face Fajardo two months later in Mexico and handily won a unanimous decision.

“I was not one hundred percent the first time I was here, What happened, happened. The second fight I was very prepared,” Rodriguez emphasized. “To be a champion, you have to go to the house of the champion.”

“Nietes can say what he wants, I will say what I want,” this was Rodriguez’s response to the champion’s statement that he did not believe that the Mexican suffered an ankle injury in training and that he will knock out Rodriguez.

“We will see on Saturday,” Rodriguez speaking through interpreter Mon Escano, talked about his dream of challenging the longest reigning Filipino world titlist,“I have waited for more than a year to fight Nietes. I was not ranked very high back then.”

When asked for his fight plan, he replied “A better question would be – How Nietes will protect himself? I will come and attack him!”

Trainer Jose Antonio Hernandez said that Nietes is very good, very strong but he is already 33 years old, which they cite as a weakness.

Rodriguez has already acclimatized, having been in the country for more than a week and training at the Elorde gym in Manila.

Nietes (35W-1L-4D,21KO’s) will be defending his WBO world junior flyweight and Ring magazine titles against the former unified WBO/IBF minimumweight champ this Saturday July 11 at the Waterfront Cebu City Hotel and Casino in the main event of PINOY PRIDE 31.

Mark “Magnifico” Magsayo (10-0,8KO’s) will be gunning for the IBF Youth featherweight title in the supporting main event against Rafael Reyes (16-4,12KO’s) of Mexico.

Reyes said that he has seen films of Magsayo, who he describes as a complicated fighter. The Mexican said he came here to win and we’ll see once the fight progresses. His trainer Edmundo Gaytan said they are also eyeing Albert Pagara, who they want to face if they beat Magsayo.

A special attraction on PINOY PRIDE 31 will be the debut of multi-awarded amateur Kevin Jake Cataraja, who will be fighting a foreigner in his first professional outing. Cataraja will be pitted against Indonesian Ardi Tefa (6-4,4KO’s) in a six rounder.