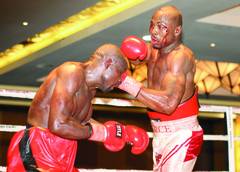 IMMANUEL Naidjala beat Luis Singo of Ecuador in the main bout, but it was a bloody encounter between Wilberforce Shihepo and Johannes Mwetupunga that stole the show at Saturday night’s boxing bonanza a the Windhoek Country Club.

Wilberforce ‘Black Mamba’ Shihepo defended his WBO Africa Super Middleweight title against Johannes ‘Tito’ Mwetupunga in an explosive and bloody encounter over 12 rounds that had the crowd up on its feet and shouting for more from the start.
The fight started dramatically as Shihepo knocked Mwetupunga down twice in the first round, but Mwetupunga was soon up again and fought back bravely.
At the end of the round, Shihepo was also warned for a late blow when he hit Mwetupunga on the ground at the end of the round.
Shihepo continued to stagger Mwetupunga with some heavy blows but Mwetupunga gave as good as he got and opened up a cut above Shihepo’s eye by the second round.
The fight took a dramatic turn in the fourth round when the boxers’ heads clashed which opened a gash on Mwetupunga’s forehead and on Shihepo’s left eye. For the remainder of the fight blood streamed down both boxers’ faces but the ring doctor allowed the fight to continue.
Shihepo had the more powerful punches but Mwetupunga was quicker, landing numerous counterattacks that had the crowd up on its feet, shouting, “Tito, Tito, Tito.”
Shihepo once again knocked Mwetupunga down to the canvas in the eighth round but he got up and gave as good as he got to see out the 12 rounds.
Shihepo was a comfortable winner on points to retain his WBO Africa Super Middleweight title, with the three judges all ruling in his favour – 117-109, 114-112, 117-110.

Immanuel Naidjala maintained his unbeaten record as a pro boxer when he beat Luis Singo of Ecuador in the main bout.
Naidjala was well ahead on points when the referee stopped the fight on the advice of the ring doctor after an accidental clash of heads.
Naidjala was leading 68-61, 70-59, 70-59 when the fight was stopped. Naidjala knocked Singo down three times but the nuggety Ecuadorean got up each time and frustrated Naidjala by continuously moving out of each.
Naidjala once again impressed with his speed and landed some sharp combinations but Singo was an elusive target and also landed some good punches on the counterattack.
Naidjala’s frustrations boiled over when he twice knocked Singo down after the bell in the third and the sixth rounds.
The end came midway through the eighth round when Singo got a cut on his head after a clash of heads. The ring doctor inspected the cut and on his recommendation the fight was stopped.
Naidjala is now unbeaten after 15 pro fights, while Singo’s record stands at 14 wins 11 defeats and 2 draws.

In another exciting match-up Tommy Hango lost his WBO Africa interim welterweight title when he was knocked out by Sacky Shikukutu in the tenth round.
Hango won the title when he beat Shikukutu on points in their first encounter in June, but this time Shikukutu was too strong for him as he regularly landed sharp uppercuts to the body throughout the fight.
Hango fought back bravely, going toe-to-toe with Shikukutu, but Shikukutu’s heavy blows started to take effect midway through the fight.
The end came after 1:53 in the tenth round when Shikukutu sent Hango crashing to the canvas with a right hook and although he tried to get up, he could not beat the count.
Samuel Kapapu won the Namibian national lightweight title with a second-round technical knockout of Peter Malakia.
Kapapu sent Malakia to the canvas in the first round and although Malakia saw out the round, Kapapu was all over him in the second, before the referee stopped the fight after 2:38.
In other fights, Toivo Mukwendje beat Mathias Johannes with a second-round knockout, Immanuel Andeleki beat Leonard Shemuvalula on points over four rounds and Sakaria Lukas beat David Egumbo on a second round technical knockout.\