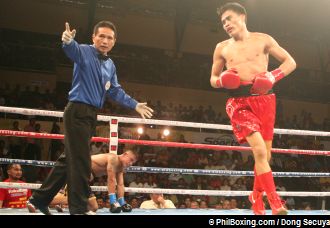 Lapulapu City – Lorenzo “Thunderbolt” Villanueva, the reigning World Boxing Organization (WBO) Oriental Featherweight champion, made a short work of Indonesian Junior Lightweight champion Eddy Camaro by scoring a quick knockout in the first round of their 10-round bout at the swank and fully air-conditioned Hoops Dome in this historic city Saturday night.

Villanueva, a young southpaw from Midsayap town in North Cotabato, immediately strutted to the center of right after the bell sounded to start round 1, threw two or three looping lefts and rights that missed before he connected with a thunderous right to the Indonesian champion’s midsection.

As Comaro backpedalled to his corner, Villanueva pursued the Indonesian and unleashed a three punch combo, a left to the back of the ear of Comaro followed by a right uppercut and finally a thunderous left just above the right neck, sending the Indonesian fighter to his knees with his left hand hanging on to the ropes and obviously unconcious.

Referee Teddy Alivio counted out Comaro at 1:02 of the first round giving the undefeated Villanueva his 20th knockout win in 21 victories.