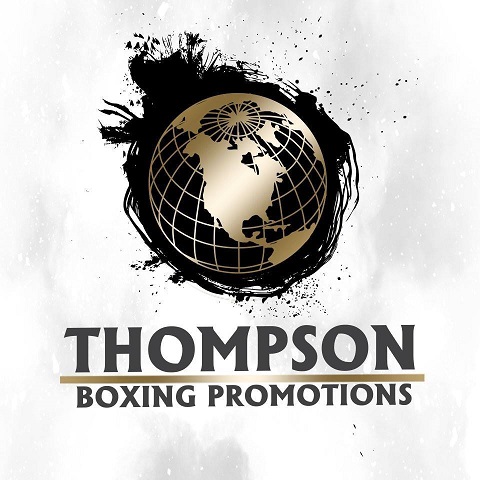 I hope all is well, first of all, I wanted to apologize for the confusion created last Friday, August 23, when Saul Sanchez fought Edwin Rodriguez in Corona, CA.

It was reported that Rodriguez, the winner of the fight by spilt decision, was declared the new WBO latino champion, however, I’d like to clarify and confirm that we were never given authorization or sanction by your organization to stage the fight as a title match. The California bout agreement only reflected the 10-round match at 118 lbs. and all the other particulars and there were no mentions of a title match.

There were some mistakes by our ring announcer who made mentioned the fight incorrectly from the ring and was not corrected in due time, which falls on me.

I wanted to shed a little bit of light and I thank you for your patience and understanding on the matter, we did not want to create an adverse situation and we look forward in working with you in our next events.

Should you require any further information please do not hesitate to contact me. 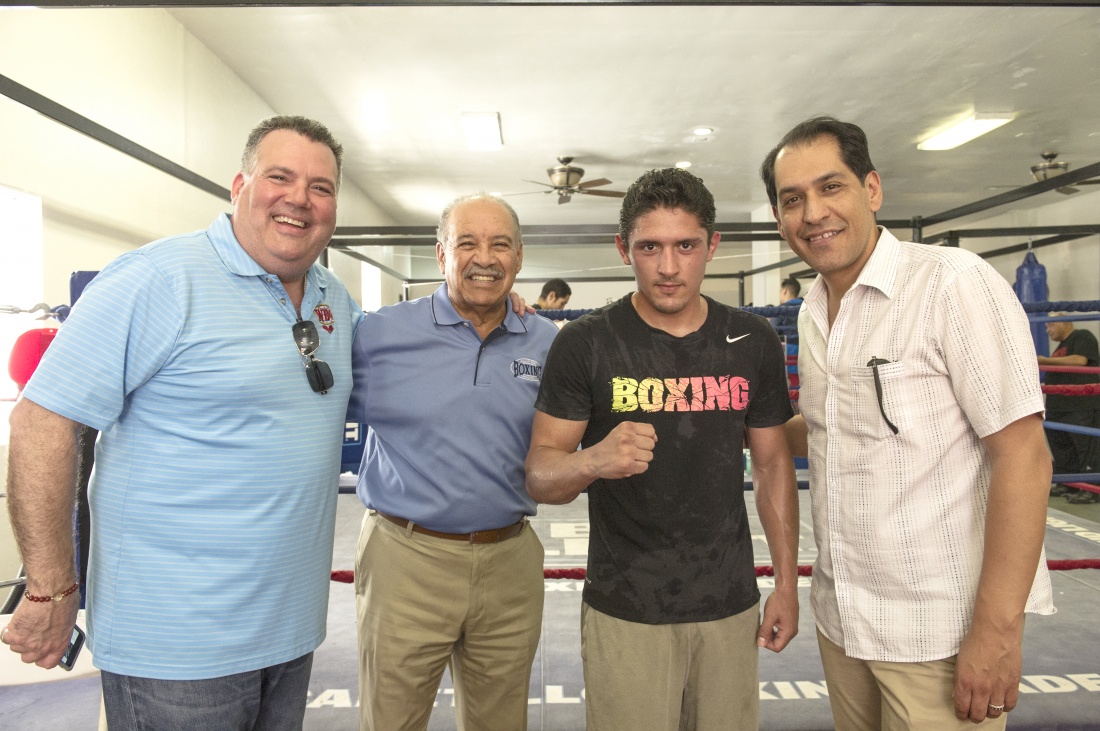 Los Angeles, CA: Undefeated welterweight contender Giovanni “Gallo de Oro” Santillan (21-0-11 KO’s) held a media work out today at the Capetillo Boxing Academy in East Los Angeles as he gets ready for of his upcoming fight July 7th against NABO Champion and #9 WBO challenger “Hurricane” Sammy Valentin (12-0-9 KO’s) at the A La Carte Pavilion as part of the successful series Boxeo Telemundo. The bout which will open the summer series is schedule for 10 rounds with Valentin title at stake.

“I very excited for this opportunity, its my first time fight on national television and I will take full advantage of it, I’m preparing myself as usual with my Father Memo Santillan and we have had a great camp” said Santillan. “It will be a great fight, Valentin comes to fight and I also come to fight but I will win by KO and take the title back to my Family and fans in San Diego”. he added.

On hand where Promoters Tuto Zabala Jr (All Star Boxing, Inc), Alex Camponovo (Thompson Boxing) and WBO President Francisco “Paco” Valcarcel who was on his way to Brisbane, Australia for the Paquiao-Horn fight this weekend.

There 7 fights on the card. Doors open at 7PM, first fight 8:00 PM. The A La Carte Pavilion is located @ 4050 Dana Shore Drive, Tampa, FL. For Information and Tickets call 813-454-7800. Valentin Vs. Santillan is presented by Tuto Zabala’s Jr., All Star Boxing, Inc in association with Thompson Boxing and will be televised live at 11:35 PM by the Telemundo Network. 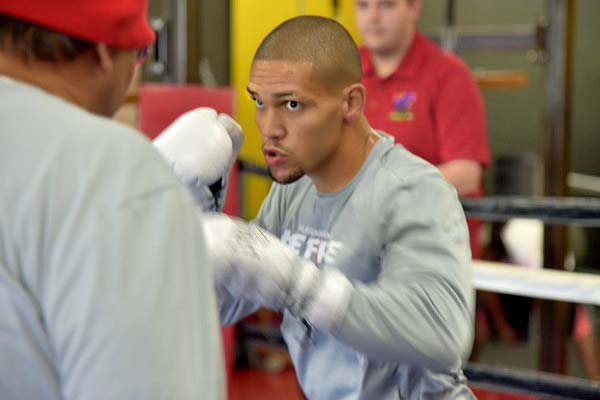 Undefeated NABO Welterweight Champion and WBO #9 contender “Hurricane” Sammy Valentin (12-0, 9 KOs) held a media workout today at the Punch for Fitness Gym in his hometown of Tampa, Florida in anticipation of his upcoming defense July 7th against fellow undefeated prospect Giovanny “Gallo de Oro” Santillan (21-0, 11 KO’s) at the A La Carte Pavilion as part of the successful series Boxeo Telemundo.

“I want to thank the media and my team for their support, on July 7 I know I have in front of me the biggest challenge of my career. Santillan is also undefeated, young and hungry but I have always passed the tests that have been put in front of me and this one will be no different,” said Valentin. “I have been working very hard with my Father (trainer) Sammy Valentin and my team and I will be ready.”

Santillan will hold a media workout next Tuesday in Los Angeles.

Doors open at 7PM, first fight 8:00 PM. The A La Carte Pavilion is located @ 4050 Dana Shore Drive, Tampa, FL. For Information and Tickets call 813-454-7800. Valentin Vs. Santillan is presented by Tuto Zabala’s Jr., All Star Boxing, Inc in association with Thompson Boxing and will be televised live at 11:35 PM by the Telemundo Network. 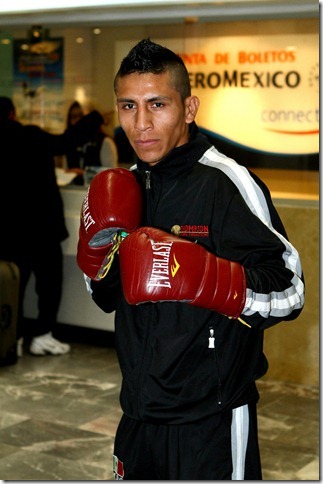 PHILADELPHIA, PA —It will be a battle of former world title challengers on July 26th as Juan Carlos Burgos will square off with Daulis Prescott in a twelve round bout for the WBO Intercontinental Jr. Lightweight title that will be held at  the beautiful Thunder Valley Casino Resort in Sacramento, California.

The fight is promoted by Banner Promotions and Thompson Boxing and will be broadcasted live on ESPN’s Friday Night Fights.

Juan Carlos Burgos of Tijuana, Mexico has a record 30-1-1 with twenty knockouts and most in boxing are calling him an “Uncrowned World Champion” for his effort on January 19th,   when he battled WBO Jr. Lightweight champion Roman Martinez to a draw.  Most at ringside and the millions watching on HBO believed that Burgos deserved to walk out of Madison Square Garden with the belt but the judges didn’t see it that way as the fight was scored 117-111 for Burgos, 116-112 for Martinez and 114-114.

The twenty-six year old is unbeaten in his last six fights, which include wins over undefeated Luis Cruz and Cesar Vazquez, as well as former world champion Cristobal Cruz.
Daulis Prescott of Barranquilla, Colombia has an impressive mark of 26-2 with nineteen knockouts.

Like Burgos, Prescott is also twenty-six years old.  He rose up in the rankings by winning his first twenty-three bouts.  In his last bout, he lost his bid for the WBA Featherweight crown when he came up short against Nicholas Walters on December 8th in Jamaica.

“We are looking forward to getting Juan Carlos back in the ring”, said Banner Promotions CEO Arthur Pelullo.

“Juan Carlos proved in the Martinez fight that he is the best 130 pound fighter in the world.  My partners at Thompson Boxing and I were ecstatic to get a new contract done with him and we feel he will rule at 130 pounds and a great performance on July 26th will get him another shot at the title”.

“It’s important to keep a young fighter like Juan Carlos busy and primed for his next chance to a world title. Daulis Prescott will test him and it should be an excellent fight. Our #1 WBO fighter is just waiting for the next opportunity to show what he is capable of.” said Alex Camponovo of Thompson Boxing.