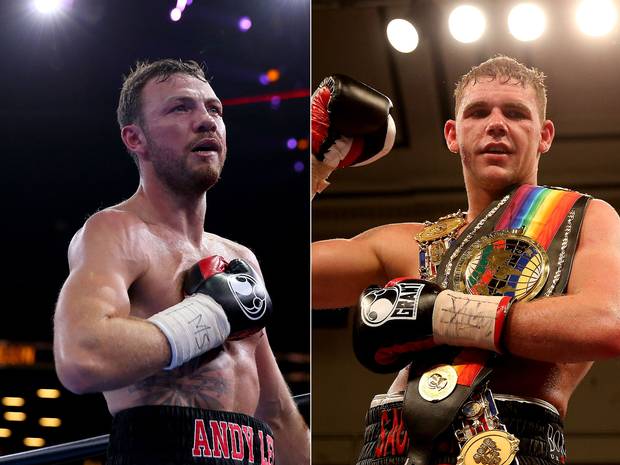 Andy Lee and Billy Joe Saunders were full of respect for each other at the press conference for their WBO middleweight title clash at Thomond Park on September 19. Champion Lee (34-2-1-KO24), 31, defends the belt he won from Matt Korobov in December for the first time – but was in action in New York back in April as he fought back to draw with Peter Quillin, who had failed to make the championship weight.

The unbeaten Saunders is the reigning British, European and Commonwealth champion and was last seen in November in outpointing bitter rival Chris Eubank Jr, having snatched headlines with some fierce insults in the lead-up to the fight.

There was no such bad blood this time, though, with Lee and Saunders – who are both from travelling backgrounds – dignified in their answers to journalists.

Lee said: “I would have driven past this stadium countless times and I always dreamed of fighting here. As soon as I won the title in December, my thoughts turned to defending here. It’ll be seen all over the world and I’m proud to put Limerick on that stage.

“It’s an honour really and it goes some way to repaying the support from the people of Limerick.

“I’m fighting one of the best middleweights in the world. He’s British champion, European champion and undefeated. He’ll come with a spirited challenge and I’ll be trying to keep hold of my belt. We’re going to put on a great show.

“The dream was to step off the plane at Shannon with the belt and people put on a great welcome for me. This is the natural progression.

“I’d like to thank Billy Joe because it takes a lot. I’ve been doing it all my career, going in to other people’s hometowns. I’ve said it all along. This is going to be a massive event and I’m delighted to be part of it.

“I know how much it hurts to lose and I never want to taste that again. I’ve been armoured by my defeats.”

Saunders (21-0-0-KO11) was equally excited by the prospect of fighting in front of 34,000 – even though the vast majority of those in attendance will be cheering on the home fighter.

The Hatfield fighter said: “As soon as I pulled up to the place, I looked at it and it was a dream come true. Everyone wants home advantage but he’s the champion and he deserves it.

“A lot of fights need building up and talking about with trash talk but this doesn’t need it. I’ve got a lot of respect for Andy. I just want his belt. You’ve got two proud travelling fighters going out there. There’ll be mixed fans coming from everywhere.

“I guarantee that both me and Andy will leave everything in there. All his support’s here but when you pull up to a place, as soon I walked in there I got a homely feeling straight away. I’ve boxed in Ireland seven times and have seven wins.

“In boxing, you have to do what’s financially right for you and your family. I stepped aside for the Korobov fight and Andy grabbed it with both hands. Fair play to him. I think he deserves to be champion and it’ll take a lot for the belt to change hands but I’m going to give it my all.”