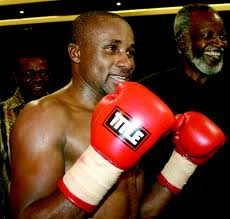 Paulus Ambunda is not afraid to go to the Philippines to defend his WBO bantamweight title. And he is unconcerned about taking on a member of the rough-and-ready Kameda family. The Namibian will make a voluntary defence of his belt when he fights Tomoki Kameda in Cebu on August 1. Known as The Rock, Ambunda knows he is in for a battle against the Japanese challenger, who is undefeated after 27 professional fights and has won 18 of them inside the distance.

The 32-year-old champion is unbeaten after 20 fights; half of them ending in short-cut victories. He won the title when he beat Pungluang Sor Singyu on points in Windhoek on March 2 this year.

His trainer, Nestor Tobias, is as confident as Ambunda is. He believes Ambunda’s training has gone well and the champion is fit and well prepared.

With the fight being held in a “neutral” city and with neutral officials in charge, Tobias feels Ambunda’s skills will enable him to retain his title. The Namibians fly to the Philippines on July 21.

Tobias has been chosen as best trainer and promoter in Africa and Ambunda as African boxer of the year, as well as Namibian sportsman of the year.

Kameda, a 22-year-old member of a famous boxing family from Tokyo, has been fighting and training in Mexico so often that he is known as Little Mexican. His brother Koki has held the WBA and WBC flyweight titles and the other brother, Daiki, now holds the WBA belt in the same division.
The brothers, and their father, Shiro, have received some bad publicity but there is no doubt about their boxing ability. Tomoki has been a professional for more than four and a half years.

He won the vacant NABF bantamweight title in February 2011 when he beat German Meraz on points in Mexico. In April last year he won the vacant WBC silver bantamweight title by stopping Jairo Hernandez in the tenth round, also in Mexico. Since then, he has beat Monico Laurente on points, stopped Javier Franco in the fifth round, Ray Las Pinas in the fourth and Nouldy Mankane in the sixth.