MANNY PACQUIAO STILL A CANDIDATE FOR FIGHTER OF THE YEAR 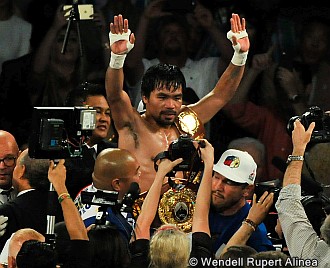 By Maloney L. Samaco –Manny Pacquiao won two times the past year 2016, the first one on a trilogy and the second one coming out of brief retirement. Those two impressive wins make the fighting senator a candidate for the Fighter of the Year honors.

Ranked No. 7 pound-for-pound by The Ring, Pacquiao knocked No. 9 P4P Bradley down twice in Rounds 7 and 9 and outpointed him in practically the twelve rounds of the fight.

Pacquiao won the WBO international welterweight title fight by unanimous decision with a score of 116-110 from all three judges.

In his comeback fight, Pacquiao defeated Jessie Vargas by 114-113, 118-109, 118-109 unanimous decision becoming the new WBO welterweight champion. The 37-year-old aging warrior knocked the 27-year-old champion down in the second round with a sharp counter punch and dominated the American all night.

In its Fighter of the Year ranking, CompuBox placed Pacqiuao 5th behind its 1st placer Terence Crawford with 49 points, 2nd placer Vasyl Lomachenko with 44, 3rd placer Andre Ward with 39, and 4th placer Roman “Chocolatito” Gonzalez with 31. Pacquiao got 27 points ahead of 6th placer Carl Frampton with 20.

Pacquiao placed No. 2 in the Power Connected % category.

Even if he is a darkhorse for the FOTY, Pacquiao still showed the world that he is still one of the top fighters of the world in 2016. 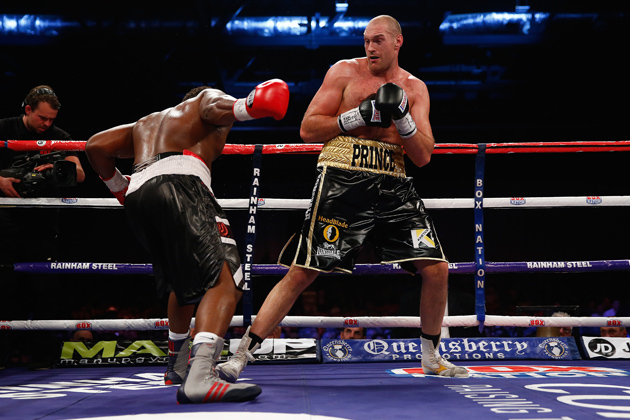 When unbeaten British heavyweight Tyson Fury steps in the ring to face Christian Hammer in London this Saturday he’ll just be glad to have the work. Prior to defeating old foe Dereck Chisora in a rematch this past November, Fury had fought just once in 18 months.

“I thought I put on a spectacular performance against Chisora, “said the 26-year-old Fury, who is THE RING’s No. 3-rated heavyweight. “I fought southpaw most of the way, against the WBO number one contender, and barely took a punch. That’s never been done and I was fresh after 10 rounds.

“I could have fought like that all night long and was very impressed with my showing after all the inactivity.”

The 27-year-old Hammer (17-3, 10 knockouts) is a Germany-based Romanian who has some skills, but he hasn’t mixed with anything resembling Fury. A dominant win over American veteran Kevin Johnson was a good result but the British star is unimpressed, both with his pending opponent and the division itself.

Fury said, “Hammer has decent footwork and he punches well in combination but a good stiff hook to the jaw will sort that out. I want to stay busy and I’m looking forward to getting back in there, but I’m not really bothered about any of these heavyweights at the moment.

“I want to fight because that’s what I get paid for.”

Fury’s rematch with Chisora was billed as an eliminator for the WBO title, which is currently held by THE RING champion Wladimir Klitschko. The very mention of the legendary Ukrainian, who faces Bryant Jennings on April 25 in New York, changes the mood perceptibly.

“Klitschko won’t fight me – ever,” said Fury with rippling frustration. “He’ll vacate the WBO title because it’s game over for him if we do get it on. I expect Wladimir to fight someone else, after he beats Jennings, which means the WBO will strip him and I’ll be fighting for a vacant title.

“When he vacates that belt, everyone will know who the real champion is because Klitschko would rather step down than face me. I’ll take Wladimir out, he knows it and I know it. People will start to believe he’s been avoiding me when he dumps that belt.”

Fury, a natural salesman, brightens up at the very mention of unbeaten WBC title holder Deontay Wilder, who defeated Bermane Stiverne last month. A matchup between the two would be a money spinner and the Englishman has been eyeing up the Anglo American confrontation for a long time.

“Wilder has a good team behind him and they’re making the right moves,” said Fury (23-0, 17 KOs). “I don’t expect them to come after me immediately because they’ll want to make some cash first. Don’t get me wrong, I’m the biggest money fight out there for him but I’m also the biggest risk.

“The thing is, when we do fight, it will be a box office smash. Both of us are young, colorful, unbeaten and we’re crazy. It’s also USA versus UK, which hasn’t happened in a long time. We’ve spoken before and I told him this day would come and he agreed. The hype started as soon as he beat Stiverne.

Fury continued, “The buildup would be as good as the fight, and someone would be getting knocked clean out. If Wilder stops a couple of mediocre opponents then they’re likely to make him a pay-per-view star in the States and then we’re talking about really big dollars.”

The prevailing thought is that 2015 will be the year when Tyson Fury gets his long awaited shot at glory and the timing could be perfect for fight fans. Whether the 6ft 10in colossus tackles the vast experience and calculated skills of Klitschko or the high voltage punching power of Wilder remains to be seen, but either match would be sizzling.

Fury said, “To be honest, Hammer is a decent European-level fighter but I’m planning on putting my fist straight through him. As soon as I hit him properly he’s gone.”