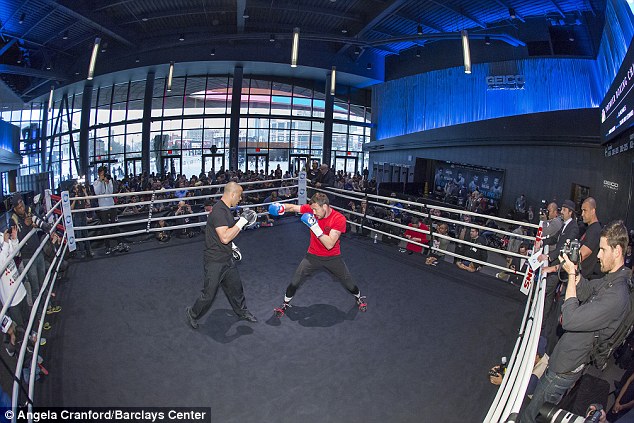 Andy Lee is confident he has improved even further since winning his world title last year.

The Irishman makes the first defence of his WBO middleweight belt against Peter Quillin in New York on Saturday.

And he is confident he is ready for anything the former champion has in his locker.

‘We’ve made unbelievable progress in the last year on my skills and everything has really just clicked for me and my team and now we’re seeing the results in the ring,’ Lee said.

‘I’m very proud to be an Irishman from Limerick defending his world championship in New York, it doesn’t get much better than that.

‘There’s been a huge weight lifted off my shoulders since winning the world title. It’s what I always wanted to do and I’ve been touted as a champion for years and if I never got it I would have been disappointed. Now the monkey is off my back and I can just box and show people who I am.

‘We’ve made physical and tactical improvements in the gym since the last fight and hopefully they’ll show up in the ring on Saturday.

‘I think this could be a technical fight or it could be a bit of a fire fight. It’s going to be a little of both at times. There will be moments where we’re looking at each other, figuring each other out, but once we exchange it could be explosive.

‘Quillin is sure of himself, but he has to be, I have the same mentality. You have to be to compete in this sport.

‘Fighting at home like Quillin is on Saturday, brings a different kind of pressure to the table, it’s the pressure of expectations and people you know coming to the fights. That’s also pressure and I know all about that. ‘I haven’t needed to build up my confidence for this fight. It’s not time to think. It’s time to do what I’ve been doing every day in the gym.’

Quillin, meanwhile, believes the fight will just be another struggle he has to overcome.

‘I never trailed in a fight and came back and won like Lee. I’ve just won all the time right out of the gate. Those other guys aren’t ‘Kid Chocolate’ so I think that’s why this fight was made,’ he said.

‘It’s a big fight for him and a big fight for me. He’s a smart fighter when he’s in trouble so I have to watch out for that. Most importantly I just need to be true to myself.

‘A lot of people had Lee as the underdog in his last fight but he came out and did great. That’s the thing about boxing; one punch can change the fight.

‘My whole life has been struggles and I’ve had to overcome every single one of those struggles. This is going to be no different from that.

‘Being a father of course made me more inspired and watching my uncle pass has made me more motivated than ever to accomplish everything I want.

‘When I gave up the belt I learned that I can be a bigger man and make tough decisions like that all of the time. People think losing is easy, but winning all the time is a different kind of pressure.’