Julaton talks about learning from Pacquiao 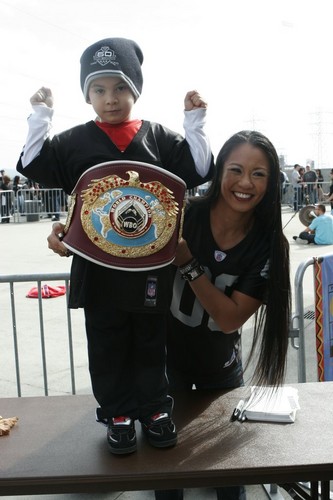 I recently caught up with 3-time Women’s WBO World Champion Ana “The Hurricane” Julaton who has been training at the Wild Card Gym with trainer Freddie Roach and assistant/manager Angelo Reyes, alongside boxing’s Pound-for-Pound king Manny Pacquiao.
Check out my conversation with the beautiful boxing heroine from the Philippine by way of Daly City, California!
On being around Pacquiao:
“One thing I definitely have learned from Manny since being around him from 2006 is that Greatness can come from anybody.  You just have to believe even when others just want to judge a book by it’s covers. With all the things, the barriers that is frustrating in my sport, Manny continues to inspire me to believe that just like him, I just have to continue to work hard and be humble and always remember the people who support me and ignore the people who don’t believe in me. Manny already paved the wave for all Filipino’s and I know I have a responsibility to do the same for all women in the world who may feel at times they are not strong enough to fight.”
On receiving 2 ringside seats from Pacquiao to his fight:
“I was so shocked when he gave me seats to the fight. For him to even think of me during this time when he has so many other things on his mind. I really appreciate all the support Manny has given me throughout my career. It gives me that extra lift to know that he believes in me.”
On her next opponent:

“Just like when Manny in early 2000 with his wars with Barrera and Morales, I want the big fights in my division Next year, WBA 122lbs Chantal Martinez and WBC 122lbs Jackie Nava for sure. I think going into next year if their promoters would contact my promoter Allan Tremblay, I am sure we can make those fights happen. A unification of that magnitude is what will elevate this sport and those fights definitely deserve to be in SHOWTIME or HBO.”

“You know me Dennis, I will fight anybody anywhere anytime.  I don’t think there has been a female fighter that bled more than I have in the last 2 years (laughing). I am proud of my scars. I want people to know you can do anything you put your mind into, even when there are barriers stopping you from doing what you believe is right.”