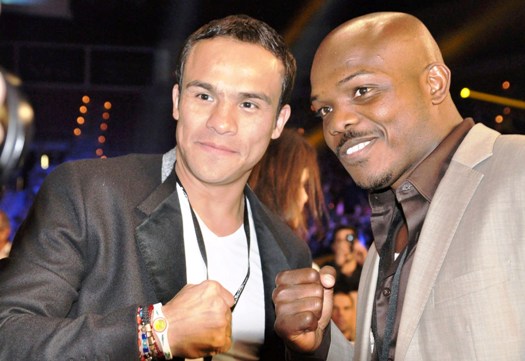 The principles of life, often disregarded in the name of sport, have shaped what could be one of the top technical bouts of the year between Juan Manuel “Dinamita” Marquez and Timothy “The Desert Storm” Bradley. The welterweight 12-rounder for Bradley’s WBO title is set for Sept. 14 at the Thomas & Mack Center in Las Vegas.

The basis of sport usually isn’t grounded in any “what is right/what is wrong” system. It is sometimes founded on the grounds of what’s most logical, but often on the grounds of finance and relatedly, a dash of selfishness or greed. Marquez threw the common sporting thesis out the window, the one that said he’d take a fifth fight with Manny Pacquiao, even after sinking him with one right hand in round six of their December 2012 fight.

That isn’t the way a boxer with eyes on the biggest possible paycheck conducts himself. Marquez fights with dignity. He loves a new challenge. He has said as much in explaining his motive for pursuing a Bradley bout rather than another Pacquiao rematch.

When he defeated Pacquiao in the fourth meeting, he proved himself as the better fighter in a back-and-forth war. That was the fight to decide all Pacquiao-Marquez fights after a three-fight trilogy featuring two controversial defeats and a draw for Marquez. Whatever the judges thought, a good number of fans felt his spot-on precision counterpunching won him all three. At nearly 40 years old, why return to the series?

Finance would be a reason. He was supposedly offered a substantial amount of money for a fifth battle with Pacquiao, even though he remained the pay-per-view “B” side. But a well-rounded man like Marquez, one who has been around the bend, is wise, and has more to fight for than cash. Money isn’t the sole reason he fights; he wants to put on a show, impress the crowd. And he isn’t going to have his career taken advantage of.

So that brings us to Juan Manuel Marquez against Timothy Bradley. HBO PPV plans to broadcast, with a full show to be announced later.

Bradley is coming off two heavily controversial bouts. The first was in June of last year against “Pac-Man” Pacquiao himself. Bradley took a title-winning split decision over 12 rounds that the majority of viewers thought he lost. Afterwards, Bradley put on a gutsy title defense against Russian slugger Ruslan Provodnikov. Despite being badly hurt and put on the deck in rounds 1 and 12, he fought through the most damaging bout of his career to edge a close decision.

Both of these fights forced Bradley to adapt and evolve to defend his now 30-0 record. Provodnikov caught him hard in round 1 with his snapping right hand and continued to batter him through round 3, but Bradley regained his composure and boxed very well until the 12th round knockdown in which he was forced to painfully sponge what consciousness he had left into a unanimous decision victory.

The Pacquiao fight was a learning experience for Bradley. He was outgunned against Pacquiao but showed merit with basic fundamentals, including a very solid jab/right hand combination he used to take three of the 12 rounds on my personal scorecard.

Forced to endure floods of hate-mail — including fruitless death threats from enraged viewers — Bradley was left in a tight position: What should he do next in his boxing career? He has now left behind the disputed “I beat Pacquiao” topic in hopes of beginning a new chapter. A victory over Marquez will leave his welterweight title gold shining brightest.

Marquez against Bradley is a fight the most die-hard boxing fan can affirmatively cheer about: These are two domineering, elite level boxers, after all. But how will it sell to the general public, which sometimes values bloodshed over technique?

Pacquiao and Floyd Mayweather talk the talk; they are very defined personalities, with Mayweather playing the foul-mouthed dictator and Pacquiao playing the humble-minded warrior. That was always an interesting dynamic to their rivalry. There was always a slowly-burning fire inside the heart of every boxing fan that said each fight was building to something more — perhaps a throwdown between each other? While no significant evidence suggested it would ever happen, fans were driven by the idea.

How does one market Bradley-Marquez? Top Rank Promotions is a socially integrated, modernly adapted and well-groomed company. You will see the television adverts, perhaps HBO’s  “24/7,” assorted promotional tidbits and much more. My question is what will truly land the fans in the seats of the Thomas & Mack Center and tapping the “order” button on their remotes?

The common enemy? Both fighters have scored upset victories over Pacquiao, and their names are forever connected for that reason.

The intriguing stories? Marquez is a hard-nosed Mexican willing to bring a show in every fight. Bradley is a young, relatable small-town Californian many consider one of the top rising stars in the fight game.

The raw substance? Bradley is a well-skilled boxer with sturdy all-around ability. He has a solid jab, knows to work the body and keep up the lateral movement, but he isn’t fearful of taking a punch and engaging toe-to-toe when necessary. Marquez is a well-tuned counterpuncher with a great right hand and controlled aggression which makes him a thrilling twist to the traditional Mexican fighting style.

Perhaps it will be some of all of the above. This is a complex operation that Top Rank’s Bob Arum and his public relations gurus will be working hard on for the months leading up to the bout.

With so many factors involved and title supremacy on the line, Bradley and Marquez will duke it out in a Mexican Independence-themed war on Sept. 14. All of the questions will surely be answered.