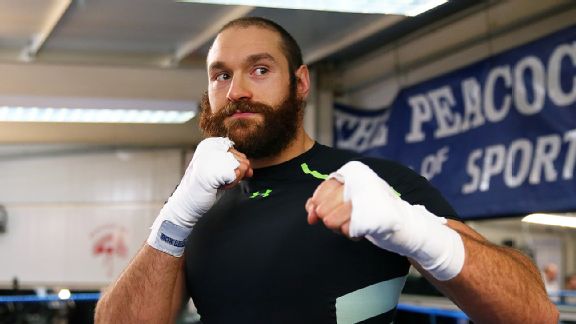 Tyson Fury has promised to stop Christian Hammer when they meet Saturday in England.

Tyson Fury, the big (6-foot-9, 260 pounds) and brash British heavyweight contender, has a world title shot coming his way in the near future. He is the mandatory challenger for champion Wladimir Klitschko.

But rather than wait on that fight, which could take place as soon as this summer, Fury is putting his position at stake by taking on Christian Hammer on Saturday (BoxNation in the United Kingdom) at The O2 arena in London.

As usual, Fury (23-0, 17 KOs) is predicting a devastating performance in what should be his final fight before fighting for the world title — if he wins.

“I’ve had a great camp, training has gone very well, and because of that I don’t see this fight going beyond five rounds,” Fury said. “I want the knockout and that’s what I’m out to get. There’s a reason this bill is being labeled Risky Business, because of everything that is on the line. I’m mandatory to face Wladimir Klitschko next, but if I don’t win this fight I’ll lose that mandatory position and my chance to fight for the world title.

“We’ve seen fighters in the past who have been in a similar position and lost, but that’s not going to happen with me. The reason is because I’m not overlooking Christian Hammer. I’ve seen him in the amateurs and I’ve seen the progress he has made in the paid ranks. He’s a very good fighter and not someone you can overlook. But a Tyson Fury fight is never boring, and I can guarantee excitement and drama when I step in the ring. Put it this way: Someone is getting knocked out and it isn’t going to be me.”

Fury, 26, looked superb in his last outing, a one-sided 10th-round demolition of Dereck Chisora in their rematch. The victory in the world title elimination fight netted Fury the European title and also made him Klitschko’s mandatory challenger, although if Fury defeats Hammer and Bryant Jennings upsets Klitschko on April 25, Fury would be next up to face Jennings.

“Tyson Fury will not go the distance against me,” said Hammer, 27. “He will be getting knocked out clean and left to pick up the pieces after the fight. He cannot hurt me with his punches because I’m in the best shape of my career for this fight, and he will not last against me. He has been put down before. He can be hit and hurt. He has plenty of heart, but once I put him down he will stay down.

“I’ve taken this fight because I know I can get the Klitschko world title fight when I beat him. Klitschko is talking about fighting Fury, but he will be talking my name once I knock out Fury.”