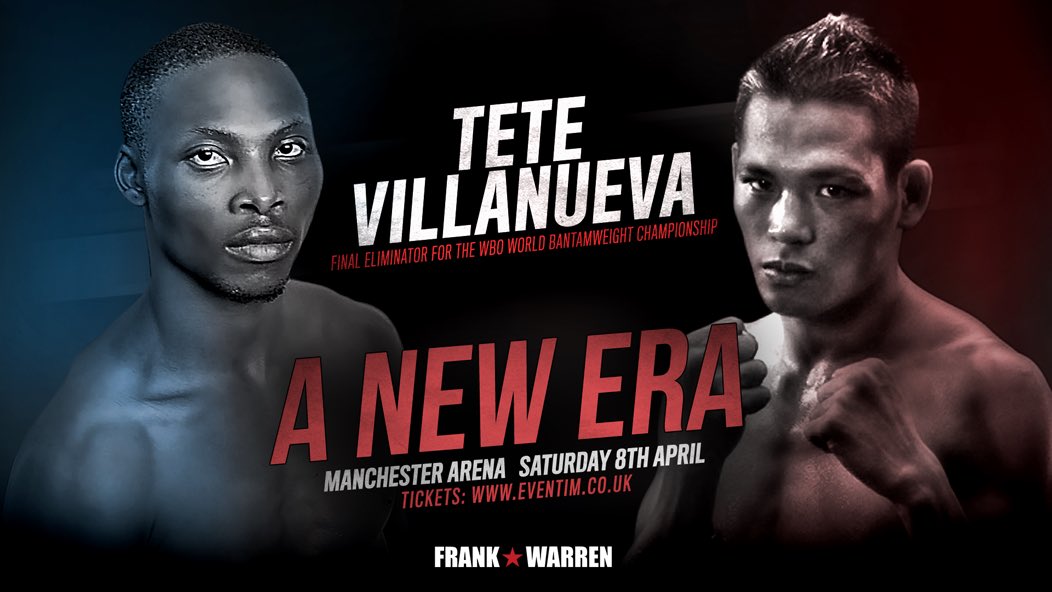 Zolani Tete is set to return to the ring later this month as he looks to claim another world title.

The former IBF super-flyweight world champion, who beat Ellesmere Port’s former bantamweight king Paul Butler in March, 2015 before relinquishing due to be offered a paltry purse for a mandatory defence against McJoe Arroyo, has been out of the ring since last June.

South Africa’s Tete (24-3, 20 KOs) will box in Manchester, at the city’s Arena, on April 8, exclusively live on BoxNation and BT Sport.

The 28-year-old southpaw, whose nickname is ‘Last Born’, was handed a final eliminator for the WBO bantamweight world title at the sanctioning body’s recent convention and it was set to happen on November 26, 2016 in Cardiff, Wales.

But the Queensberry Promotions confirmed on Thursday that Tete will return against Arthur Villanueva of Philippines on the ‘A New Era’ card in which features two debut outings and a world title as well as cracking domestic showdown, with further clashes to be revealed in due course.

Villanueva, 27, has a record of 30-1 (16 KOs) and is a former challenger to Tete’s old IBF belt at 115 pounds, but the pair are set to meet a division north at bantamweight as they each look for the opportunity to come up against current Boxing Organisation king in the division Marlon Tapales.

The current WBO Asia-Pacific champion Villanueva is coming off the back of a stunning second-round knockout against Mexico’s Juan Jimenez in California.

“It has always been my dream to fight for another world title,” said Tete. “I’m very excited about the fight but I know it is one that I can’t lose if I want another belt around my waist.

“I want to be known as one of the best fighters in the world and clean up the rest of the belts, but first I have to get my hands on the WBO bantamweight title and to do that I need to beat Villanueva.

“From what I have seen of him I can tell he’s a strong fighter and hopefully he will put up a good fight against me but Zolani Tete will be victorious on the night.

“I’m delighted to be returning to the UK. It’s a great feeling and I won’t disappoint my UK fans. I’m going to put on an exciting show like always.”

In other news, Steve Wood of VIP Promotions has announced a Central Area title showdown between holder Adam Ismail and challenger Andy Colquhoun.

The pair, who campaign at welterweight, will clash on March 24 at Robin Park Sports & Tennis Centre in Wigan, supported by a solid undercard. The show will be streamed exclusively live on VIP Boxing TV.

Also on the VIP schedule, Scott Fitzgerald returns home to Preston –– at the Guild Hall –– on March 11 and Wood, who is also the manager of the aforementioned Flanagan, also has a show scheduled for February 18 at Manchester’s Victoria Warehouse as well as March 18 at the Devonshire Dome in Buxton, with Jack Massey topping the bill.

And another Steve Wood-managed fighter in the shape of Ryan Mulcahy has had his ring return date handed to him.

‘The Monk’, who is undefeated in seven with two early, confirmed that he has been added to the undercard of Matchroom Boxing’s next Liverpool card.

The show, which has yet to be formally announced, will take place at the ECHO Arena on April 22, will be exclusively live on Sky Sports and is expected to feature WBC International super-middleweight champion Rocky Fielding and Mulcahy’s new gym-mate Tom Farrell among others.

Elsewhere, Anthony Yarde, the Ilford ‘Beast’ who has already made his US debut, is set for his ring return.

Yarde, 25 is 9-0 with eight early and will be looking to get into double figures in the paid code when he boxes at Leicester Arena on April 22, exclusively live on BT Sport and BoxNation.