Gretchen “Chen Chen” Abaniel failed to capitalize on another crack at a world title when she lost to Thailand’s Teeraporn Pannimit in a clash for the vacant WBO female minimumweight title in Bangkok.

The 26 year old Abaniel who  lost her bid for the IBF title to highly talented Mexican Katia Gutierrez by a 4th round TKO in Sinaloa, Mexico last December 10 after dropping a ten round decision for the Women’s International Boxing Association and WBC Asia Boxing Council title to Samson Tor Buamas in Sukothai, Thailand on February 19, 2011 started off well against Pannimit but faded in the second half of the bout according to WBO Asia Pacific vice president Leon Panoncillo and lost a unanimous decision.

Panoncillo told the Manila Standard all three judges scored the fight for the Thai girl. Salven Lagumbay of the Philippines and Indonesia’s Rois Muhammad scored it for  Teeraporn   96-94 while Thai judge Surat Soikrachang had the Thai girl the winner by a wider 98-92 margin.

Panoncillo said it was a good fight with Gretchen “doing well in the early rounds and was winning the first half of the fight.”

However, the WBO executive said Abaniel “lost steam in the later rounds Terraporn came out strong throwing more   effective combinations while Gretchen was more in a defensive mode, backing up and being less effective.”

Panoncillo said it was “a close fight.”

The younger 19 year old Teeraporn Pannimit had earlier also lost by a 5th round TKO to another fancied Mexican Jessica Chavez in an IBF light flyweight female title fight on January 14, 2012 but came back to win an eight round unanimous decision over Naporporn Superchamps whos real name is Napaporn Sor Ploenchit.

Abaniel  who is handled by former  Australian boxer Terry Mogg dropped to 10-4 with 2 knockouts while Teeraport improved to 16-5 with 5 knockouts. 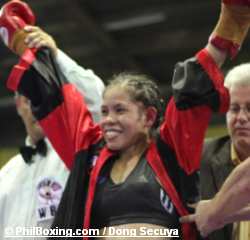 Hardworking and talented Gretchen “Chen Chen” Abaniel gets a crack at the vacant WBO Female mini-flyweight title against Thailand’s Teeraporn Pannimit in Bangkok on April 25.

In her last fight in Sinaloa, Mexico, Abaniel suffered a 4th round TKO at the hands of the tremendously talented Katia Gutierrez in a clash for the IBF minimum weight title last December 10.

She had earlier dropped a ten round unanimous decision to Samson Tor Buamas in a bout for the vacant WBC Asian Boxing Council and the Women’s International Boxing Association titles on February 19, 2011.

Pannimit is also coming off back-to-back losses. She lost by a 5th round TKO to Jessica Chavez in an IBF light flyweight title fight on January 14 this year and prior to that dropped a ten round unanimous decision to Susi Kantiakian, an Armenian girl who fights out of Germany in a clash for the WBO/WBA and World International Boxing Federation flyweight title on October 21, 2011. 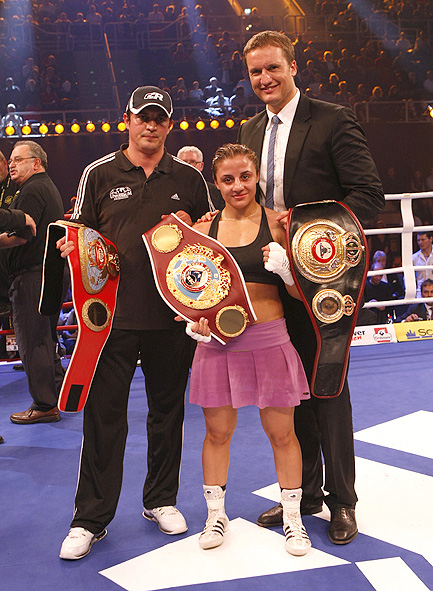 At the end of the ten rounds, 24-year-old Kentikian defeated 19-year-old Pannimit on points, and with a unanimous decision by the judges.