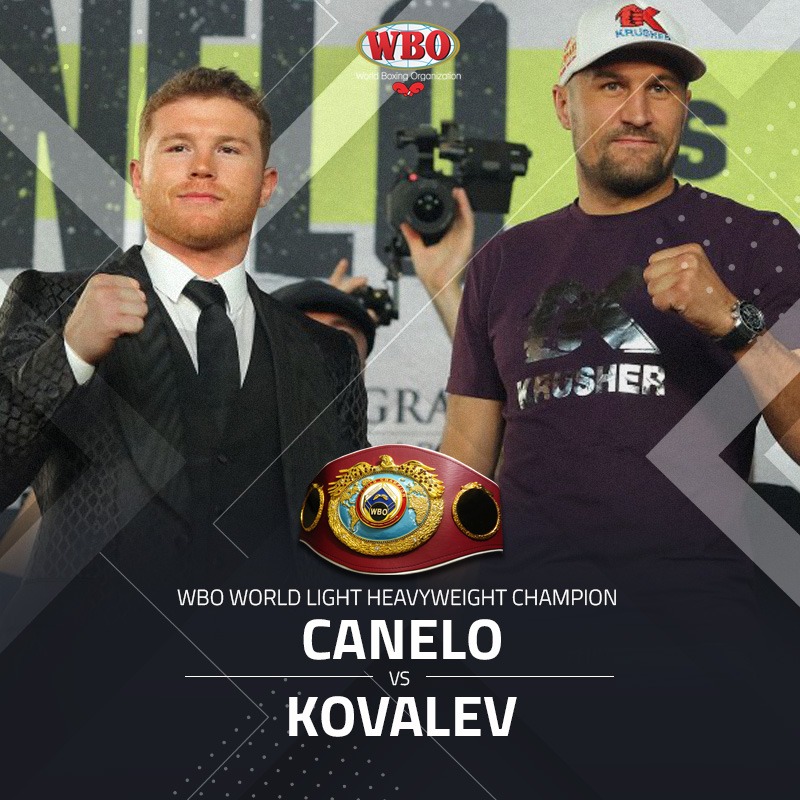 On Saturday, November 2, Canelo Alvarez (51-1-2, 34 KOs) will take on a new challenge as he moves into the 175-pound weight class in a 12-round fight against Sergey “Krusher” Kovalev (34-3-1, 29 KOs) for Kovalev’s WBO Light Heavyweight World Title. This highly anticipated bout and its co-featured fights will be broadcast live from MGM Grand in Las Vegas to big screens across the nation.A full undercard will be shown prior to the main event.

Tickets for “Canelo Alvarez vs Sergey ‘Krusher’ Kovalev” can be purchased online at www.FathomEvents.comor at participating theater box offices now.

Canelo, the 29-year-old native of Guadalajara, Jalisco, Mexico, became the face of boxing by taking on some of the biggest names in the sport. At 154 pounds, Canelo captured several world titles and defeated the likes of Austin “No Doubt” Trout, Sugar Shane Mosley, Alfredo “El Perro” Angulo, Erislandy “The American Dream” Lara and Liam “Beefy” Smith. At 160 pounds, Canelo defeated Gennady “GGG” Golovkin and Daniel “Miracle Man” Jacobs to establish himself as the king of the middleweight division. In the 168-pound division, Canelo became the WBA Super Middleweight World Champion by stopping Rocky Fielding in three rounds.

Canelo will now look to make history again by becoming the second Mexican boxer to hold a world title in the light heavyweight division. The pound-for-pound king will at the same time join an elite group of four-division world champions from Mexico.

On November 2, Kovalev (36) will participate in his 17th consecutive world title bout and the most lucrative fight of his career against the biggest star in boxing. A Russian knockout artist and Three-Time Light Heavyweight World Champion, “Krusher” is no stranger to fighting in hostile territory. He captured the WBO Light Heavyweight World Title in 2013 when he traveled to Wales and scored a stunning knockout of Nathan Cleverly. Kovalev traveled to Atlantic City to meet future Hall of Famer Bernard “The Alien” Hopkins to unify the WBO, WBA and IBF titles with a lopsided unanimous decision victory in 2014. As unified champion, “Krusher” successfully defended his titles twice against current WBA Light Heavyweight Champion Jean Pascal in Montreal, scoring a stoppage victory both times.

In August of this year, Kovalev finally got the chance to fight in his own hometown of Chelyabinsk, Russia, stopping undefeated mandatory challenger Anthony Yarde in front of a sold-out crowd.

“We are proud to partner again with Golden Boy to bring boxing’s biggest star, Canelo Alvarez back to cinemas nationwide,” said Ray Nutt, Fathom Events CEO. “Fight fans will want to see all the action up on the big screen as Canelo takes on Sergey ‘Krusher’ Kovalev.”

The undercard for this event will feature a full night of action. Rising superstar Ryan Garcia (18-0, 15 KOs) of Victorville, Calif. will face “Ruthless” Romero Duno (21-1, 16 KOs) of Cotabato City, Philippines in the 12-round co-main event..