NOTES FROM SHANGHAI PART I: PBCC AND CHINA’S BOXING BOOM 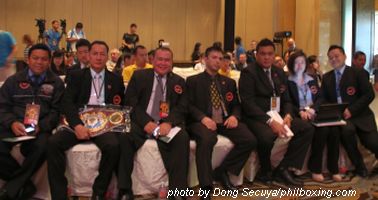 SHANGHAI- Chinese boxing fans are expected to troop to the Mercedes Benz Arena today for “FIST OF POWER”, a live event that will feature Ik Yang (15-0, 9 KOs) of Dalian, China against Sukkasem Kietyongyuth (13-2, 8 KOs), of Roi-Et, Thailand for the WBO Asia-Pacific lightweight title.

The August 26 card also has something to offer for the Filipino fight fans – Randy “Razor” Petalcorin (21-1-1,16KO’s) of Gen. Santos City will go up against Walter Tello (20-7,8KO’s) of Panama for the interim WBA world light flyweight title.

It is not just Filipino boxers, but Filipino ring officials have also become a regular presence in boxing promotions held in China. When Top Rank started their first high profile boxing event – FISTS OF GOLD – in Macau last April 2013, ring officials of the World Boxing Organization (WBO) headed by its president Paco Valcarcel and WBO Vice-President for Asia-Pacific Leon Panoncillo were among those who handled and supervised the birth of big time boxing promotions in this country. This started the influx of experienced boxing officials from the Philippines who provided their expertise in the professional side of the sport. They have formed a good partnership with Thai,Australian and Chinese boxing officials.

Panoncillo is currently the driving force and head of the Professional Boxing Commission of China (PBCC). Aside from supervising events, he has conducted workshops for Chinese boxing officials who are interested in learning how professional bouts are conducted and supervised. One example was the demonstration on the proper taping or wrapping of a boxer’s hand and gloves which was held after today’s FIST OF POWER weigh-in at the Sheraton Hotel. Panoncillo, who also has the experience of being a boxing trainer, showed the legal way of handwrapping as well as the illegal way to make inspectors aware of any shenanigans happening inside the fighters’ dressing room.

In various boxing events in Macau and in mainland China, the PBCC has conducted itself in a professional manner and has trained aspiring officials to do things the right way. It also has been responsible in the way they provide licenses, conduct the needed medical requirements for boxers and make sure the proper emergency facilities are available.

“Pro boxing is new and still growing here, If they start doing things the right way, the rest will be easy.” Panoncillo said.   Top Rank has tied up with SECA to build the growth of pro boxing here in China. SECA CEO Sheng Li stated in today’s presscon that they still don’t have much knowledge in pro boxing in China, hence his partnership with Top Rank. Looking at the steady increase of boxing promotions in this country, it has been mutually beneficial for both parties. The PBCC has also become a steady and reliable presence. The Tuesday fight card in Shanghai has seven Chinese boxers. Aside from Petalcorin, another Filipino boxer, Marlon Alta (12-4,9KO’s) will be pitted against Qu Peng (5-0-1,3KO’s) of China in a non-title light heavyweight match-up.