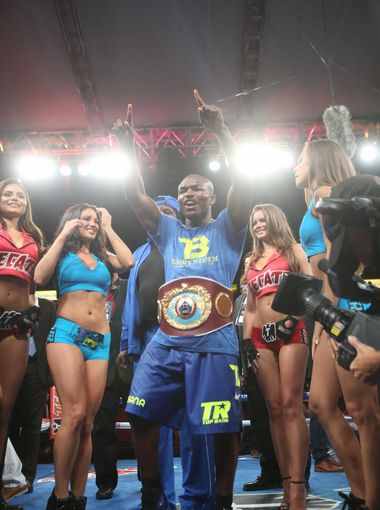 Timothy Bradley of Cathedral City (left) connects to the face of Jessie Vargas during Saturday night’s 12-round WBO welterweight fight in Carson. Bradley won his first fight since Oct. 12, 2013.

Jessie Vargas was standing on the ropes in his corner, a giant grin on his face and his arms raised following their 12-round title bout. It appeared, for a few tense moments, that this would be another confusing ending for the Cathedral City boxer.

With 14 seconds remaining, Vargas caught Bradley with the biggest shot of their fight Saturday night. The right hook knocked Bradley off balance and he backpedaled for several feet, nearly falling to the canvas as the 10-second warning clapper sounded and referee Pat Russell called the fight.

As Vargas raced back to his corner with his arms up in victory, Bradley stood baffled, along with the crowd of 4,711 at StubHub Center. After a moment of pandemonium, and some clarification, Russell instead sent the fight to the scorecards, where Bradley won by unanimous decision to claim the interim WBO welterweight title — the same championship belt he held prior to his first professional loss, to Manny Pacquiao, last year. The fight was the 1,000th shown on HBO since the network began televising fights in 1973.

“I got hit with a good shot (and) I went back,” Bradley said. “All of a sudden the referee waived his hands. I didn’t know what was going on. I thought it was the end for the fight, but I didn’t really know.”

Russell clarified his decision to send it to the cards by saying that he mistook the 10-second warning as the end of the round. “I made the call that I thought was correct,” he said.

Had Russell not called the fight seconds early, Vargas believes he would have finished Bradley off.

“I hit him with three of four shots, it was still going on and then all of a sudden the fight stops and there were about seven seconds left,” Vargas said. “All I needed was one more shot and I would have won.

“Those seven seconds cost me the fight.”

The announcement that Bradley won the fight — 116-112, 117-111 and 115-112 — was met with mixed reaction from the crowd, which appeared to be divided between the two fighters. But few could argue with the result. All three judges scored at least eight rounds in favor of Bradley heading into the 12th and final round.

Unlike his fight six months ago that resulted in a split-draw with Diego Chaves in Las Vegas, Bradley was clearly the early aggressor against Vargas. He was quicker on his feet and as a result much more explosive with his punches. He landed a number of crisp shots on Vargas that allowed him to capture the early momentum.

But Bradley (32-1-1, 12 KOs), 31, may have actually been overly aggressive. Initiating the action often left him open to counter punches, of which Vargas landed several. Bradley’s left eye began to swell and, although Bradley was winning on the cards, he allowed Vargas to hang around until the end. Referee Pat Russell ended Saturday’s fight prematurely between Timothy Bradley and Jessie Vargas at the StubHub Center in Carson. In this photo Bradley looks over as things are sorted out. (Photo: J. Omar Ornelas/ The Desert Sun)

“Vargas had a hell of a jab,” Bradley said. “He hurt me all during the fight. It really bothered me.”

Vargas (26-1, 9 KOs), a secondary junior welterweight titleholder in the 140-pound weight class, moved up a weight division to fight Bradley and accept a $600,000 payday.

Bradley pocketed $1.5 million for what was his first win in more than 20 months when he defeated Juan Manuel Marquez in Oct. 2013.

It was reported last month that the winner of this fight must face 26-year-old Sadam Ali (22-0, 13 KOs) in their first title defense later this year. Top Rank promotions chief executive Bob Arum would not confirm that after the fight, and even wondered aloud if a Bradley-Vargas rematch made sense.

Vargas publicly asked Bradley for a rematch after the fight but time will tell if it ever materializes.

“Let’s start where we left off tonight.” Vargas said.