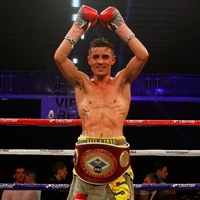 Crolla claimed the title with a career-best performance against Gavin Rees in Bolton in June, and makes his first defence against former WBU and European Super Featherweight champion Foster, who’s last title fight came in the same Arena when he challenged Gary Buckland for the British Super Featherweight title on the undercard of Ricky Hatton’s comeback a year ago.

Foster was set to face former interim WBO Lightweight champion Michael Katsidis in Australia on the same bill as St. Helens’ Middleweight star Martin Murray but now grabs the chance to move up to Lightweight on his home patch. ‘Million Dollar’ Crolla was due to fight Martin Gethin for the British title and the 27 year old is determined to capitalise on his recent resurgence with a strong performance against Foster leading to big fights in 2014.

“If I keep winning then it will happen because Eddie can deliver big fights,” said Crolla. “At the minute I’m not on (WBO champion) Ricky Burns’ radar, he’s looking at fighting Ray Beltran again or maybe Terence Crawford, and I’ve got unfinished business with Gethin that can hopefully be resolved around the same time. I’ve got to work my way up to that, but if I do I don’t see why I cannot challenge Ricky or we could go down another route, that’s all up to Eddie, I’m just going to keep concentrating on winning.

“It’s nice to be the Inter-Continental champion; it gives you a World ranking and puts you in the shop window for some big fights, so I have to defend the title well. In the Lightweight division there are domestic fights that can almost serve as World title eliminators or propel you up the World rankings.”

Foster added: “It’s a great opportunity to fight on a massive bill in my hometown. I’m always in the gym and in great shape and I was preparing for December 11 in Australia, so there are no issues there, I’m ready.

“I’m up for any fight and this one promises to be a cracker. Anthony is a very good fighter and a local derby always gets the blood going so I can’t wait to get in there. He’s been in some tough fights recently with Gavin Rees and Derry Mathews that might have taken something out of him, so I think I can get up there at Lightweight and show that I’ve got the power to gate crash his party.”

Scott Quigg defends his WBA Super Bantamweight title against Diego Silva, Quigg’s gym-mate and resurgent Lightweight star Anthony Crolla will defend his WBO Inter-Continental Lightweight title following the withdrawal of British champion Martin Gethin on a busy night for trainer Joe Gallagher, who also has unbeaten Lightweight talent Scotty Cardle on the bill, but Super Middleweight sensation Callum Smith has been forced to pull out of the show through injury.

There’s also a late spot on the bill for Murray, who is back in action after his controversial loss to Sergio Martinez in his second World title challenge in April. The 31 year old will now face Sergey Khomitsky in Manchester after his December fight in Australia fell through.