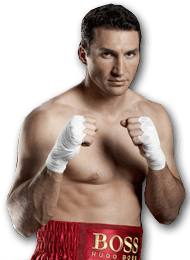 Known as “The Steel Hammer,” Klitschko first achieved world attention at the 1996 Summer Olympics in Atlanta, Georgia. He defeated Paea Wolfgramm to win the Super-Heavyweight gold medal. Klitschko turned professional with Universum Box-Promotion in Hamburg under the tutelage of Fritz Sdunek. He suffered his first setback after 24 bouts without a loss to journeyman Ross Puritty, who entered the bout with a record of 24–13–1. Klitschko won the WBO Heavyweight title from American Chris Byrd. Byrd had previously upset his elder brother Vitali (who pulled out injured during their bout).

After five successful defenses of the WBO belt, but on March 2003 Klitschko suffered an upset loss to Corrie Sanders. Sanders battered Klitschko for two rounds knocking him out. After winning two minor bouts in Germany and enlisting the services of legendary boxing trainer Emmanuel Steward, Klitschko again fought for the vacated WBO title on 10 April 2004, in Las Vegas, against Lamon Brewster. Klitschko sent Brewster to the canvas in the fourth round; however, things turned around in the fifth when Brewster’s punches began backing him up. Not defending himself and leaning into ropes for support, Klitschko took a standing eight count. On unsteady legs, Klitschko went to his knees after the bell and the referee stopped the fight for his safety. Following his loss to Brewster, Klitschko began his journey back towards the top of the heavyweight division. First, he defeated DaVarryl Williamson by technical decision. He then knocked out undefeated Eliseo Castillo. Klitschko then signed to fight undefeated power puncher Samuel Peter in an IBF eliminator. The much anticipated bout proved to be hugely entertaining. It went some way towards redeeming Klitschko in the heavyweight division.

Though Peter scored three knockdowns (two in round 5, one in round 10) Klitschko withstood the Nigerian’s power and went on to dominate for long periods. He even rocked Peter in the final round. The win against Peter showed that Klitschko was capable of defeating power punchers. On 22 April 2006, in Mannheim, Germany, Klitschko again defeated Chris Byrd by TKO and won the IBF Heavyweight title. Klitschko then avenged one of his previous losses as he defeated Lamon Brewster in July 2007. Klitschko later defeated WBO Heavyweight Champion Sultan Ibragimov at Madison Square Garden in New York City on 23 February 2008 to unify the IBF and WBO heavyweight titles. On 12 July 2008, Klitschko defeated Tony Thompson by KO in the eleventh round. Klitschko was scheduled to defend his titles against Alexander Povetkin later in 2008,[6] but on 25 October, Povetkin withdrew from the fight due to an ankle injury. Instead, Klitschko faced Hasim Rahman on 13 December 2008 and won by TKO.

Rahman seemed unable to withstand Klitschko’s punch power. The referee finally called a stop to the one-sided contest in the 7th round after Rahman failed to respond to a series of good shots. Klitschko was scheduled to face David Haye who pulled out within weeks of the fight complaining of a back injury. Salvaging the 20 June 2009 date and venue, Klitschko instead retained the IBF, WBO, IBO world heavyweight titles and also won the vacant Ring Magazine heavyweight title by defeating replacement opponent and Ring #3 ranked Ruslan Chagaev when Chagaev retired after an onslaught of punches towards the end of the ninth round. As Chagaev was WBA champion in recess, the title was not on the line.

Klitschko’s win over Chagaev was seen as one of his most impressive performances in the ring. In December 2009, Klitschko defeated Chambers by KO five seconds before the end of the final round. Following the match with Chambers, a unification fight between Klitschko and David Haye, who as of May 2009 held the WBA title, appeared to be in the offing. Both sides began negotiations for a potential fight and the bout was targeted for September. The fight did not materialize and Klitschko took on mandatory challenger Alexander Povetkin. The bout between Klitschko and Povetkin was tentatively scheduled to take place in Frankfurt, Germany, on September 2010. In July 2010, it was confirmed that the bout would be taking place in Frankfurt. However, Povetkin backed out of the $2 million purse fight. Samuel Peter replaced

Povetkin for the scheduled fight. Peter fought Klitschko on 11 September 2010, for the Ukrainian’s IBF, WBO and IBO heavyweight titles. Klitschko won again, by knocking out Peter in the 10th round. Klitschko was set to fight Dereck Chisora on 11 December, but the fight was later called off on 8 December due to a Klitschko injury. On 5 January 2011, it was announced that Dereck Chisora would get his fight with Klitschko. The fight against Dereck Chisora was rescheduled for 30 April 2011. However, on 4 March, it was announced Klitschko pulled out of the fight. On 5 March, it announced that the fight against David Haye will take place on 2 July 2011. Klitschko fought David Haye in a heavyweight unification fight for the WBA, WBO, IBF, IBO and The Ring heavyweight titles. The fight took place at the Imtech Arena, Hamburg, Germany on 2 July 2011. Klitschko dominated the fight from the start. Klitschko won by unanimous decision.