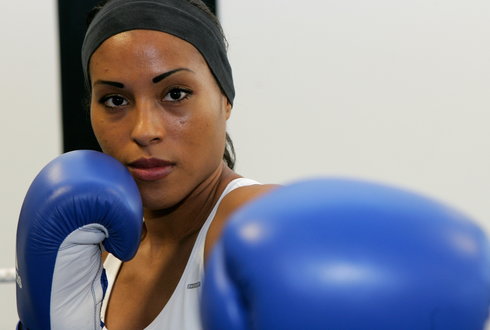 The pound-for-pound queen is back. Cecilia Brækhus (24-0, 7 KOs) defends her WBC, WBA and WBO Female World Welterweight titles against Jessica Balogun (24-3, 12 KOs) on June 7th at the Sport and Congress Center in Schwerin, Germany.

The pair meet in a repeat of their 2012 contest and having previously shared a ring ‘’The First Lady’’ is aware of the threat posed by the German challenger.

‘’I have a lot of respect for Balogun. She is an explosive boxer with good technique and an unbelievable fighting spirit,’’ said Brækhus.

‘’She is one of the toughest female boxers around. In her last fight she moved up two weight divisions to face Christina Hammer, the WBO Female World Middleweight Champion, and pushed her for ten hard rounds.

‘’I am excited by the challenge. I look forward to testing myself against her once again. She gave me a good fight two years ago and I am expecting the same in Schwerin.’’

Since their first fight there has been a change of personnel in the Brækhus camp with the introduction of renowned German coach Otto Ramin.

Ramin will be in the Bergen boxer’s corner for the second time following an impressive points victory over Myriam Lamare in February.

‘’Otto is a fantastic coach,’’ said the Brækhus. ‘’We only had two months together before the Lamare fight. Since then we have got to know each other much better and have established a great relationship. We now have a really good understanding.

‘’In the gym we have been working on improving my strengths. I am natural boxer not a brawler so a lot of the focus has been on improving my movement and footwork. I believe we will see the benefit of this on June 7th.

‘’Everything has gone to plan. I feel good! I am in great shape and I can’t wait to get back in the ring and back to doing what I love.’’