Parker and Tupou clash on Saturday 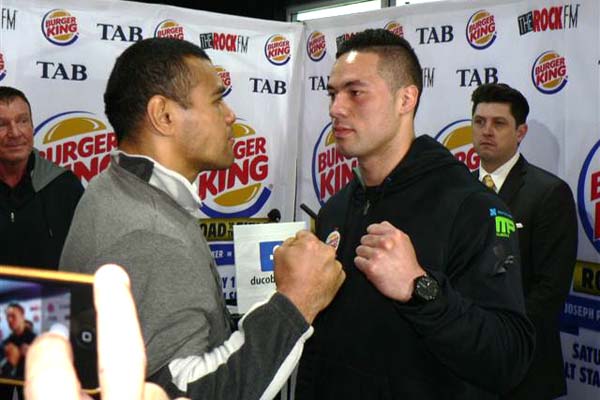 WBO #8, WBA #10 Joseph Parker (14-0, 12 KOs) will clash with WBO #13 Bowie Tupou (25-3, 17 KOs) over twelve rounds on Saturday at the Southlands Stadium in Invercargill, New Zealand, with PABA and WBO regional titles up for grabs. Tupou is trained by former three-time world champion Jeff Fenech, who is confident his charge can defeat New Zealand’s pride and joy inside the distance.

“I believe Bowie will take Joseph Parker somewhere he hasn’t been before,” a confident Fenech declared as the fighters squared off at a media conference in Auckland on Tuesday. “He will do something to Joseph, especially over those first six rounds, that Joseph has never experienced before. I believe the only way that Bowie can win the fight is by knockout so we have trained to knock Joseph Parker out.”

Fenech said he had been impressed by Tupou’s work and attitude during their six-week training camp.

“Bowie has caused a lot of damage in the gym. He has knocked out opponents, he has dropped opponents with body shots.”

“Bowie sparred with all the best [Australian] heavyweights out there and had no problems whatsoever. He has come through unscathed. He will give Joseph Parker the real test that he needs finally.”