THE up-and-coming young stars of the ALA Gym will get much needed exposure in a huge boxing event at the posh Solaire Resort and Casino in Manila next weekend.

Unbeaten prospects Albert Pagara, Mark Magsayo and Melvin Gumban will be featured in the undercard of Pinoy Pride XXIV – “The Future is Now”.

“We feel that it is important for our young prospects to build their confidence and to be exposed as they prepare themselves to headline Idol,” ALA Promotions president Michael Aldeguer told Sun.Star Cebu.

Pagara, Magsayo and Gumban are all included in ALA Promotions’ roster of young fighters that will be featured in their boxing show “Idol.”

“They have the potential but only time can tell,” said Aldeguer.

Also in the undercard are other up-and-coming boxers taking on each other.

Genesis Servania (23-0, 9 KOs) is seeing action in the main event against one of his toughest opponents to date, former world champion Alexander Muñoz (36-5, 28 KOs), in a WBO Inter-Continental super bantamweight title defense. 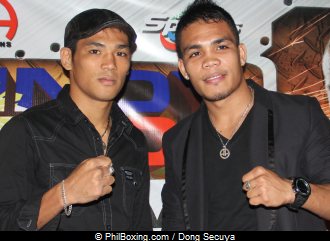 The official launching of the card billed as “The Future is Now” was held Wednesday noon at the Copenhagen Hotel and Residences. During the event, ALA Promotions Pres and CEO Michael Aldegeuer stated that this fight will determine if Servania is ready to fight for a world title. He said that Servania is in search of a career defining fight and Muñoz, a former WBA super flyweight champ, will certainly provide a tough test.

Muñoz has lost to quality fighters like Cristian Mijares, Koki Kameda and Leo Santa Cruz. This will be Servania’s second stint as a Pinoy Pride headliner and his first as a main event event boxer in Metro Manila. Last October in Cebu City, Servania, who was recently picked as the best boxer by the WBO, knocked out Panamanian Rafael Concepcion in two rounds.Servania recently arrived from his training stint in the U.S and Mexico

This is the second PINOY PRIDE event set at the Solaire. Last July 13, 2013, the venue was the site of Merlito Sabillo’s successful defense of his WBO 105 lb division title against Jorle Estrada of Colombia.

Hernandez owns a disqualification win against Filipino minimumweight contender Denver Cuello and a split decision win over Moises Fuentes. This is the same Fuentes who fought Donnie Nietes to a draw here in Cebu last year. In 2011, Hernandez lost to Kazuto Ioka of Japan in his attempt to win the WBC minimumweight title. He also lost to Ramon Garcia Hirales by 8th round KO last year. The undercards will also showcase another unbeaten ALA boxer, “Prince” Albert Pagara, who will fight Isack Junior of Indonesia.

Aleye had an impressive showing against Rodel Wenceslao last month during the Sinulog Festival here in Cebu.

ALA Promotions CEO Michael Aldeguer also announced their plans for this year’s PINOY PRIDE events. They will have an event in Davao City this April 5 with Jason Pagara as the headliner. The venue of the rematch between Nietes and Fuentes is still under negotiation but if it will be held here, they plan to stage the event at the Mall of Asia Arena on May 3. There is a June 20 event penned for Dubai and a July card in San Diego.The California State Athletic Commission has approved ALA Promotions’ plan to stage a boxing show there this year.

Does this mean there will be fewer big boxing events for Cebu?

Aldeguer acknowledged PINOY PRIDE’s origins and growth in Cebu and thanked the Cebu media for their continuing support. He also stated that since Cebu boxing fans have been watching so many big events throughout the years, they have learned to expect higher quality match-ups. Cebu, however, is in need of a bigger boxing venue, bigger than the Waterfront Hotel. There is a huge arena under construction at the South Reclamation area and this could very well host the next world title bouts here in the country’s fight capital. 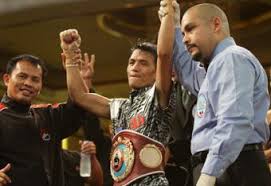 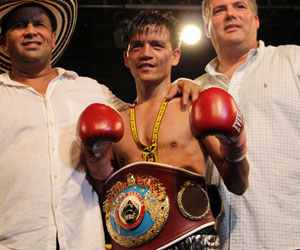