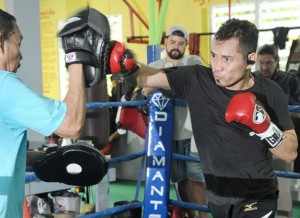 Donaire had earlier indicated he was hoping his next title defense will be in Manila so he can repay the fans who have supported him especially after his gallant performance against Cesar Juarez of Mexico to win the WBO super bantamweight title for the second time around.

The New Standard/boxingmirror.com learned that the giant broadcast network ABS-CBN had come to terms with Top Rank promoter Bob Arum who recently signed a three-fight deal with Donaire for 2016, Donaire, Asia’s leading promotional outfit, ALA Promotions and Donaire himself.

Arum had previously told us that Donaire would defend his title against Evgeny Gradovich, the former featherweight champion nicknamed the “Russian-Mexican” sometime in late April after the planned Manny Pacquiao fight on April 9 although Pacquiao has still to pick an opponent.

Donaire told us at a luncheon hosted by Gabby Lopez, the top honcho of the giant broadcast network ABS-CBN, that Gradovich has been calling him out and although they are friends and he was a sparring partner when he prepared for the Wilfredo Vazquez Jr title fight, its all business and nothing personal.

He said Gradovich “is like Cesar Juarez. He keeps coming forward and throws a lot of punches even when retreating” but conceded that he doesn’t have too much power.

Donaire told the New Standard/boxingmirro.com that he just has to study tapes of his opponent and indicated that he didn’t have tapes of Juarez to study before the fight and couldn’t do it because the opponent from whom he won the WBO Intercontinental title was a southpaw.

Donaire said he will fight anybody they put in front of him and emphasized “I’m ready to train, ready to go.”

The WBO super bantamweight champion a second time around praised wife Rachel for his change in attitude and habits and his father/trainer “Dodong” Donaire for “doing an amazing job” both during training and during the fight itself but admitted he couldn’t implement all his instructions in-between rounds because of “the freak accident” when he was tripped by Puerto Rican referee, Pena.

He said there were times during the fight when he nailed Juarez with thunderous punches to the body and head and he seemingly fell unconscious for a second but then just as suddenly woke up making Nonito wonder how he did it.

Donaire was happy to have redeemed his reputation with the brutal “Fight of the Year’ candidate and welcomed the tremendous response he has received for his remarkable performance against a fighter of the caliber of Juarez.

Gradovich, a fleet-footed southpaw with quick hands and a fighter who throws a lot of punches even when back-pedaling won the featherweight title by a 9th round TKO after in a rematch with Australia’s Billy Dib on November 24, 2013 after winning the title via a twelve round split decision in March 1, 2013.

Despite putting on a game defense of his title on May 30 this year, Gradovich lost by an 8th round technical decision to Britain’s Lee Selby last October 24.

The Daily Mail of Britain reported that Selby”put on an exceptional performance at the O2 Arena but said that the manner in which the rough Gradovich was dethroned was not the natural conclusion that seemed inevitable”.

A deep cut from an accidental clash of heads did the damage in the seventh round and the referee called for the doctor a minute into the following round and after a quick inspection of Gradovich’s right eye the fight was waved off.

The Daily Mail said “that was unfortunate but in going to the scorecards it revealed the narrow facts of Selby’s brilliance. Two judges gave Selby who is referred to as “The Welsh Mayweather” a six round margin and a third judge gave Selby all eight rounds.”

The report said considering the fight was “against a big-punching Russian in his fifth title defense the performance was quite exceptional, a master-class of dancing feet and quick hands” and pointed out that “everytime Gradovich surged, he seemed to be tagged by a disappearing man.”