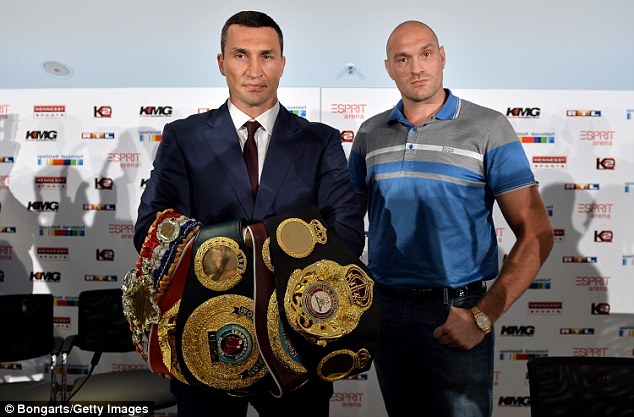 Tyson Fury (left) and Wladimir Klitschko are preparing to face each other for the world heavyweight title.  The pair will do battle at the Esprit-Arena in Dusseldorf, Germany in front of a sell-out crowd .

Wladimir Klitschko asked the first question at the start of what will be a long pre-fight ritual and Tyson Fury gave him the answer in his usual uncensored fashion.

Klitschko inquired: ‘How do you feel about fighting for the world heavyweight championship for the first time?’

Fury replied: ‘It is my mission to rid boxing of you because you’re a boring old man. You have as much charisma as my underpants. ‘You’re a wrinkled old man with a glass chin and I am going to make that glass explode like a bottle hitting a wall.’

What had begun as a mutually respectful first media conference to begin setting up Fury’s return to Dusseldorf for his stadium mega-fight on October 24 suddenly had lift off.

Fury used some bad language: ‘I’m an American-style fighter with European fitness and that adds up to you’re f*****.’

There was an unprintable obscenity hung around the first syllable of the multiple champion’s surname.

The Germans made much of how victory would take Klitschko to 28 world title fights, one more than the old record held by the immortal Joe Louis.

But Fury said: ‘Are you greater than Louis, Ali, Frazier, Holmes? I think not. You’ve just fought bums well selected for you by your management. ‘When I look at you I’m not feared. I don’t even see a big man because you’re not only shorter than me (Fury is 6ft 9in, Klitschko 6ft 6in) but you’re light for a modern heavyweight.

‘When I went to your training camp once I saw just your tired old jab-and-grab routine. I came away full of confidence. You’re nothing. History tells that when even great heavyweights get to your age (Klitschko is 39) they go into rapid decline. It also says that old men give way to young lions like me (Fury is 26).

‘You look old even though I think you’ve had botox. Jab-and-grab won’t be enough against me.’ Klitschko, a sports psychologist, talked of repeating the ‘therapy’ he administered in beating David Haye ‘which made him a better person.’

Fury reacted: ‘I’ll hire you as my therapist after the fight because you’ll be out of a job.’

But when that, and much more, was said and done, it would not be correct to depict as a rant and a bust-up on this preview visit to Dussledorf’s magnificent football stadium, under the sliding roof of which 55,000 will watch these two have the argument which really matters.

The tickets went on sale on Tuesday. Klitschko announced a renewed five-fight deal with his German TV paymasters. Bidding for the UK broadcast rights began with Sky, BoxNation and BT all in contention.

Klitschko laughed at the Tyson tirade and said: ‘Good. Now he’s being entertaining. That means the fight will be exciting. This is business.’

Fury had been the personification of politeness at the opening of the session: ‘Wladimir is a great champion and at his age I admire him for taking on a young gun like me. He never ducks anyone.’

Then he said: ‘It’s not business for me. It’s personal. You’re a robotic bore and I fell asleep listening to your long speech. ‘I will shut you up.’ That, certainly, was easier said than done. Klitschko – in suit-and-tie contrast to Fury’s smart sports shirt – controlled the occasion and enjoyed doing so, drawing Fury out by saying: ‘You sing, you dance, you’re a cool dude.’  The reply: ‘I’m also unique, the one-in-a-thousand-years fighter you have never faced before and never will again.’ ‘And I don’t have words to express my delight that he has to fight someone so old. Because with age comes wisdom. My fists will speak louder than his mouth.’

But both men were trying hard not to smile, even when they continued the banter while posing for the customary stare-down photographs.

They shook hands on it.