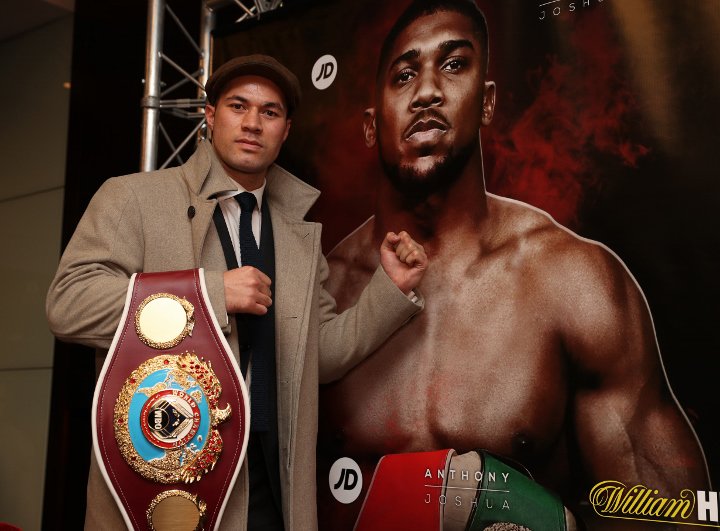 After brutally knocking out Lucas Browne on Saturday night on HBO, Dillian Whyte immediately started screaming for a fight with Deontay Wilder.

He’s not the only one. Any professional fighter above 200 pounds would love to crash the Anthony Joshua-Deontay Wilder party and get even a fraction of the amount of money those two are set to generate. In fact, there’s likely a large number of fighters below 200 pounds who would gladly hit the sizzler and eat their way up above two bills to do it.

This Saturday, Joseph Parker will have an honest-to-goodness shot at crashing that party when he takes on Joshua in a heavyweight title unification fight on Showtime and Sky Sports PPV.

Outside of the contingent of active heavyweight fighters, there won’t be too many non-New Zealanders rooting for Parker to pull the upset. For one, Joshua is overwhelmingly popular, and already established as one of the biggest box office attractions in the history of boxing. But also, a bout between Joshua and Wilder is too mouth-watering, too perfect, and frankly, too profitable for everyone involved for anyone to want anything other than that particular fight next.

Generally, that’s exactly what happens. Boxing isn’t a league, so with the exception of a handful of sanctioning body rules, the powers that be can set up any fight they want at pretty much any time. Disgruntled Facebook users and the guy who insists on talking to you at the bar while the fights are on like to grumble about how “the best don’t fight the best, ya see, that’s the problem with boxing,” but the reality is that historically, the best fights usually happen. Most great fights do get made, because great fights make money, and that’s what everyone in the sport is here to do.

“It doesn’t really bother me,” said Parker on a recent SHOWTIME conference call of the constant Wilder-Joshua chatter. “I think everyone is entitled to their opinion and the fight they want to see. I think what’s important for us is that we focus on what’s in front of us and that’s Anthony Joshua. Our focus is on Anthony Joshua and being in great shape and being healthy. It gives us motivation in training and we know what our focus is. Our focus is Anthony Joshua and putting on the best performance of our lives March 31.”

On occasion, fighters in Parker’s position do indeed turn in the performance of their lives. As much as the construct of boxing allows for arranging things perfectly, unless you’re criminally fixing fights, you can never account for every variable. Challengers in world title fighters are still world class fighters, and even if they’re a step below that, they’re still human beings with two fists.

“There’s no doubt in my mind that fight will happen. And there’s no doubt in my mind that I’ll beat Wilder as well. This is where we’re heading. Fight after fight, my view on it is this,” said Joshua. “We reached out to Deontay Wilder’s team before the fight with Joseph Parker was made. And once that fight didn’t happen, I put Wilder aside and focused solely on Parker.

“While most mega fights have been made over the years, plans have been ruined by challengers in fights designed to set up bigger ones.

Perhaps the most famous example of this is also one of the most celebrated upsets in the history of sports, when Jim Braddock defeated Max Baer for the heavyweight championship of the world. The plan was for Baer to face Joe Louis for the title, but Cinderella Man ruined those plans. Baer did face Louis next anyway, and the bout did do big business even without the title on the line—84,000 were in attendance, and some suggest an additional 9,000 were there as well, for a million dollar gate. Without the title on the line however, it’s probably the biggest fight to never really be discussed in boxing circles.

Ray Mercer was the king of blowing chances at big fights in tune-up fights. In 1992, he vacated his WBO heavyweight title to face Larry Holmes in what he saw as an opportunity to gain notoriety leading into a bout with then-lineal champ Evander Holyfield. Instead, Holmes turned in one of the greatest old man performances ever, completely neutralizing Mercer en route to a decision victory. The very next year, Mercer would drop a decision to the 18-9 Jesse Ferguson in a bout bathed in controversy. Mercer was accused of attempting to bribe Ferguson to throw the fight, but was ultimately found not guilty. Nonetheless, the loss spoiled a planned bout against Riddick Bowe. After exacting revenge on Ferguson in a rematch, the very next year Mercer lost to trialhorse Marion Wilson, spoiling a big money fight with Frank Bruno in Hong Kong.

Even all-time greats slip up at the wrong time. In 1997, then-WBC super welterweight champ Terry Norris was matched against Keith Mullings on the undercard of Oscar De La Hoya-Wilfredo Rivera. The plan was for both Norris and De La Hoya to win, and Norris to move down to 147 to face De La Hoya in a PPV clash. Norris couldn’t hold up his end of the bargain, as he was stopped my Mullings in the ninth round, leaving a $4.5 million dollar payday on the table.

This Saturday, Joseph Parker will either be the stepping stone to a fight we’ll always remember, or the road block causing an upset we’ll never forget.