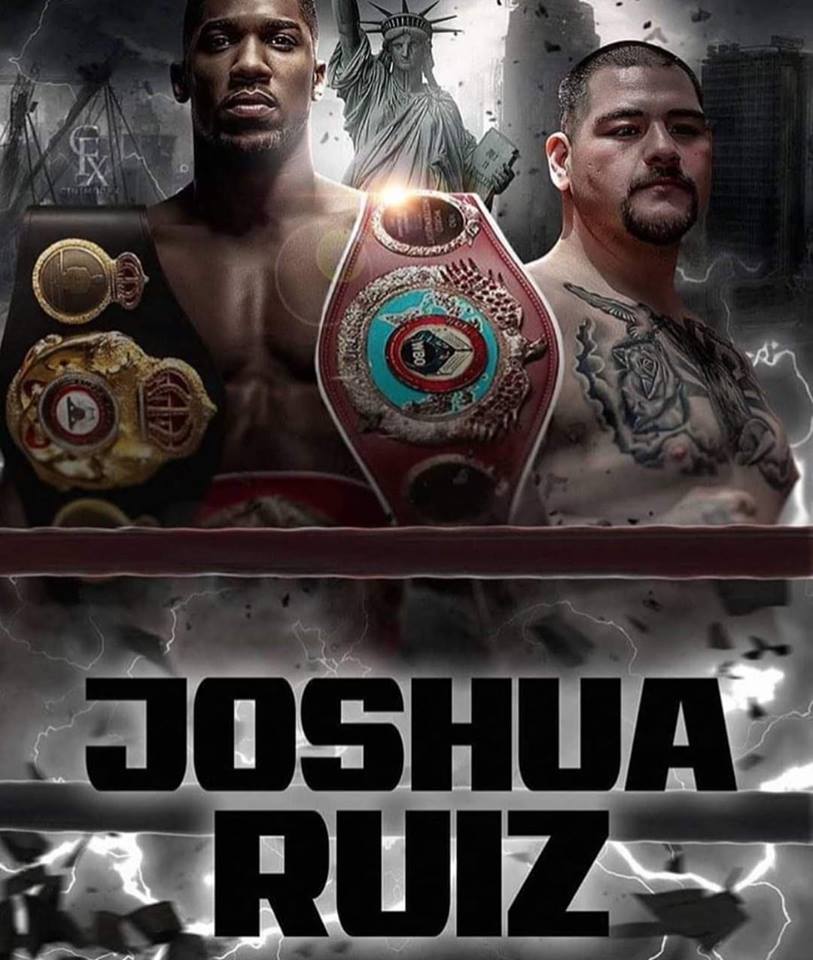 Anthony Joshua has insisted that he hasn’t underestimated Andy Ruiz Jr. “one bit” ahead of their unified Heavyweight World title clash at Madison Square Garden in New York on Saturday June 1, shown live on DAZN in the US and Sky Sports Box Office in the UK.

The California-based Mexican is in his second World title tilt having pushed former WBO Heavyweight ruler Joseph Parker to the limit in the Kiwi’s hometown in December 2016, being edged out by the finest of margins via a majority decision.

Ruiz has another golden opportunity to create history by becoming the first ever Mexican Heavyweight World Champion in the Big Apple next week and the ‘Destroyer’ has warned IBF, WBA, WBO and IBO champ ‘AJ’ to under-estimate him at his peril.

Joshua heads into his highly-anticipated US debut as a heavy favourite with many bookies but the British sensation says he is all too aware of the threats posed by his latest challenger, who he feels is deserving of a second World title shot after stepping up to the plate when others shied-away.

“It’s not about what you look like, it’s a craft, a skill, and what’s in your heart and your head matters in the end,” said Joshua. “Andy has shown he has all that, he can fight and box, that’s what matters. I think Andy is a great challenger and will bring it on June 1.

“All I’ve heard is ‘AJ will smash him in a round’. From the outside they think that anyone can box, so how is the guy that doesn’t look like a fighter able to box? I always say that if you put ten bodybuilders in the ring, not one of them could fight for a regional title in boxing.

“Take me out of my body but keep the same attributes and height, same jab, same chin, same heart and same mind, but I looked different – I’d still get to the same position I am in because it’s what is within you that makes a champion, your genetics, and his genetics are the same – and he took the fight!

“He’s keen, he’s game and you cannot knock him. He can fight and he’s got hands. He gave a World Champion in Joseph Parker lots of problems, and when you look at the fight the Parker gave Whyte when people are saying Whyte can beat Wilder, Fury and me, Andy is championship level for sure, and I have not underestimated him one bit.”

Joshua and Ruiz clash on a huge night of action at MSG with Irish sensation Katie Taylor clashing with Delfine Persoon for the undisputed Women’s World Lightweight championship, New Yorker Chris Algieri defending his WBO International title against Tommy Coyle is a crunch Super-Lightweight showdown and Josh Kelly making his US debut as he defends his WBA International Welterweight title against Philadelphia’s Ray Robinson – with more exciting undercard additions announced this week. 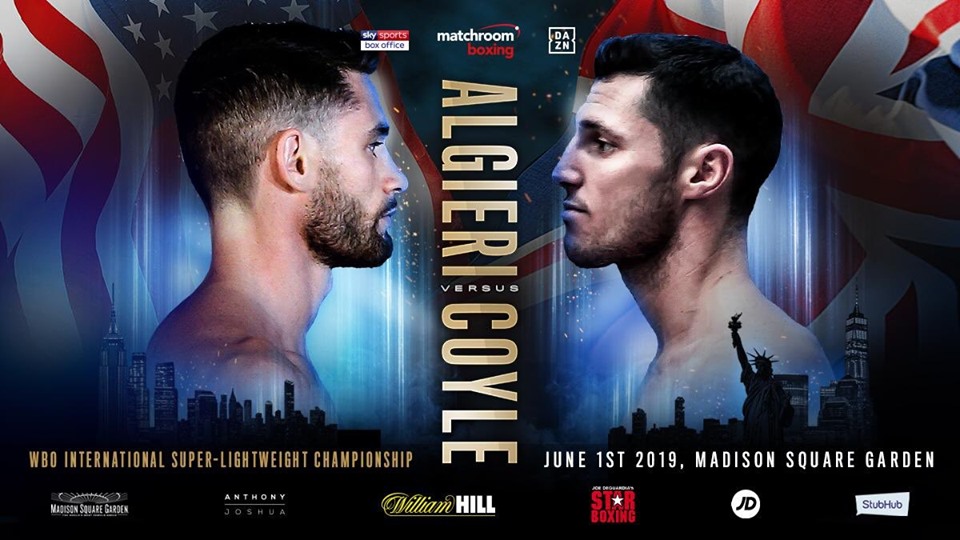 Chris Algieri and Tommy Coyle will clash in a crossroads showdown on Saturday June 1 at Madison Square Garden, New York, live on DAZN in the US and Sky Sports Box Office.

Algieri (23-3 8 KOs) puts the WBO International Junior Welterweight title on the line that he landed in January with a hard fought win over Daniel Gonzalez at the Theater at MSG. The former WBO World ruler made his return to the ring on his Huntington, NY home patch in November following two and a half years out of the ring, beating Angel Hernandez over ten rounds before moving on to land the strap he defends.

Coyle (25-4 12 KOs) is fresh from his exciting US debut in Boston in October, sharing ten now trademark back-and-forth rounds with Ryan Kielczweski to win on points over ten. ‘Boom Boom’ moves up from Lightweight where he was Commonwealth king in April 2018 after stopping Sean ‘Masher’ Dodd in Liverpool inside six.

Algieri and Coyle lock horns on the undercard of Heavyweight kingpin Anthony Joshua’s USA debut against Andy Ruiz knowing that the winner will be in the frame for a potential World title shot against WBO champion and Matchroom Boxing USA and DAZN star Maurice Hooker – and both men know that the stakes are high for their respective careers.

“I’m very excited to be fighting once again at The Mecca of Boxing, Madison Square Garden on June 1,” said Algieri. “I know that Tommy Coyle is another tough test for me and that a victory will bring me one step closer to another World title fight.

“I’d like to thank my entire team for making this possible and for their total support of my quest to once again become a World champion.”

“I’m absolutely delighted to be boxing on such a huge event at Madison Square Garden,” said Coyle. “It’s a dream come true. Fighting in America is one thing, but fighting at the mecca of boxing against a former World Champion in Chris Algieri is just unbelievable and I’m so up for it.

“I’m expecting a Gatti vs. Ward style fight, I really am. I know how tough Chris is, you’ve only got to watch him in the Provodnikov fight, I’m not sure if he broke his eye socket or not but he just gritted his teeth and battled on. I think we’re both cut from the same cloth. It can only go one way and I think that’s a war.

“I honestly believe that this fight has come at the perfect time for me. It’s like I’m having a rebirth in my career and I’m probably performing the best I’ve ever performed in the gym. If I come through this fight successfully there could be a World title shot on the horizon for me.”

Algieri and Coyle clash on a huge night of action at Madison Square Garden where Joshua’s World title defense against Ruiz is supported by Irish sensation Katie Taylor clashing with Delfine Persoon for the undisputed Women’s World Lightweight championship – with more undercard fights to be announced shortly. 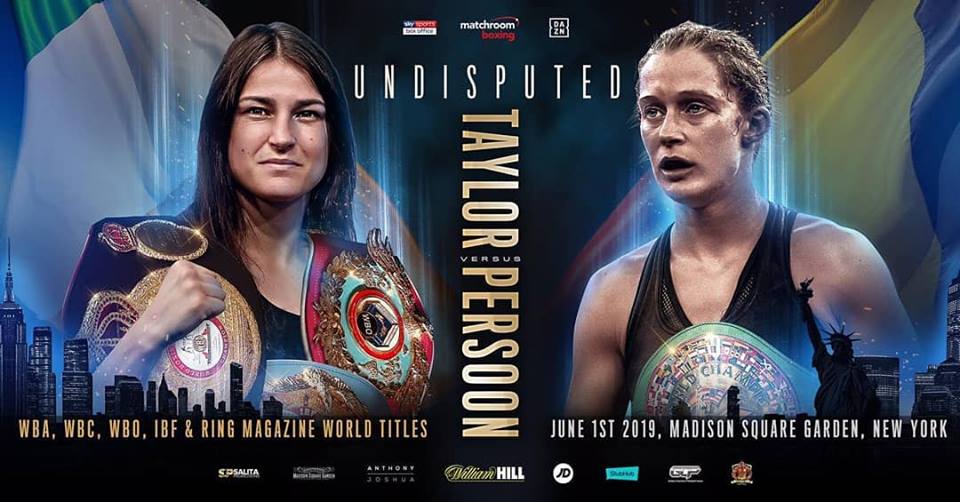 WBO Unified champion Katie Taylor will face WBC Champion Delfine Persoon for the undisputed Lightweight championship of the World on Saturday June 1 at Madison Square Garden in New York, live on DAZN in the US and on Sky Sports Box Office in the UK.

Taylor (13-0 6KOs) added the WBO title in March, stopping Rose Volante in the ninth round in Philadelphia, a sixth win inside the distance for the Irish sensation after the former amateur star won her first World title in just her seventh pro outing.

The 32 year old takes on Persoon on the undercard of Anthony Joshua’s IBF, WBA and WBO World Heavyweight title defense against Jarrell Miller in the Big Apple, making it the third time Taylor has boxed on the same bill as her fellow London 2012 Olympic gold medal winner Joshua.

Along with the WBA, IBF, WBO and WBC titles, Taylor and Persoon will battle for the Ring magazine belt – the first time the title has been on the line at Lightweight for women, another landmark moment for both fighters and the sport.

Persoon (43-1 18KOs) has held the WBC strap for five years with nine defenses in that reign and the Belgian star fights outside of Europe for the first time in her career as she joins Taylor in aiming to cement her spot as the number one 135lbs lady on the planet.

“It’s great that she has finally signed for the fight and I’m delighted that Eddie has been able to make it,” said Taylor. “After my fight last month I went back home for a week but then it was straight back to Connecticut to start the hard work in training camp for this fight.

“When I turned professional my first goal was to win a World title but then my next priority was to become undisputed champion so obviously this fight gives me the opportunity to do that so it’s massive for my career.

“Women’s boxing is in such great place right now and these are the kind of super fights that will really take it to new heights. Persoon is recognized as one of the best in the world pound for pound and has been the WBC champ now for over five years so it’s the best against the best. Madison Square Garden seems like the perfect setting for a fight of this magnitude.”

“This is a very unique opportunity for me and I’m thankful we’ve got the fight made,” said Persoon. “I did not have the opportunity to participate in the Olympic Games and now I get the chance to compete with the Olympic champion in Katie Taylor.

“I expect this will be a very tough and honest fight, and that the best boxer may win this title fight – and I expect that to be me.”

“This is it – this is everything, the absolute pinnacle of the sport,” said promoter Eddie Hearn. “The dream is on, the undisputed championship and I can’t wait to see this fight on June 1.

“This is the toughest test of Katie’s amateur and pro career, two pound-for-pound greats putting it all on the line at the mecca of boxing – the atmosphere is going to be something else.”