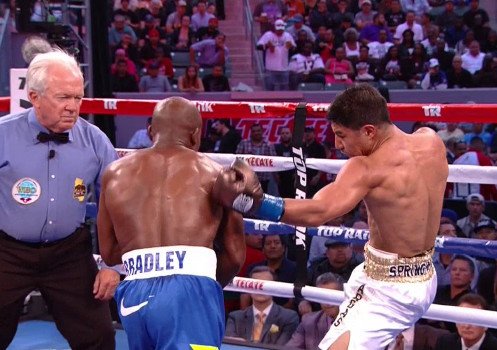 By Scott Gilfoid: WBO welterweight champion Jessie Vargas (27-1, 10 KOs) has signed his contract for a unification match against IBF 147lb belt holder Kell Brook (36-0, 25 KOs) for a contest that will be taking place in September in the UK. There’s a possibility the fight could take place on August 27, according to Dan Rafael.

I don’t know. Maybe Vargas is a huge star in the UK? If so, then more power to Brook for getting him as his opponent. Brook wants to collect welterweight titles. I guess it’s some kind of thing that will validate him. I don’t think so. If Brook wins the WBO title off Vargas, he’ll still be a paper champion in my eyes because he still will not have faced Keith Thurman, Danny Garcia or Errol Spence. Beating Vargas is small time stuff in my view. Brook needs to face Spence, Thurman, Garcia and he needs a rematch against Shawn Porter.

Vargas will be getting a career high payday of $1.7 million. That’s pretty good money for a fighter that arguably no better than ninth best fighter in the 147lb division. Vargas is a decent fighter, but I rate many welterweights ahead of him including Brook. It’s good that Vargas is getting a nice payday but I can’t see him beating Brook.

“It’s really exciting,” manager Cameron Dunkin said to ESPN.com. “It’s a great opportunity for Jessie. It’s a fight think he can win. I love his attitude. He’s so positive. He’s training like a madman. He’s really serious about getting this win. It’s not just the payday. He wants to win the fight. I love the attitude. Win, lose, whatever, he’s so confident in himself. I’m really proud of him.”

Nah, I don’t agree with Dunkin. I think Vargas is a good basic fighter, but I do not see him beating Brook, especially with the fight taking place in Sheffield. Vargas is going to need to be looking for a KO because I can’t see him winning a decision.

If I was to give Vargas in how to prepare for the Brook fight, I would tell him to work on fighting out of a clinch because Brook may resort to holding all night long if he doesn’t like the sting from Vargas’ shots. Brook was clinching all night long against Porter and getting away with it by not losing points. Vargas needs to train in how to keep throwing punches while being held in a clinch because he may need these tools to help him get Brook to let go of him.

Vargas is a step up for Brook for who he’s been fighting lately. In Brook’s last three fights, he’s beaten Kevin Bizier, Jo Jo Dan and Frankie Gavin.