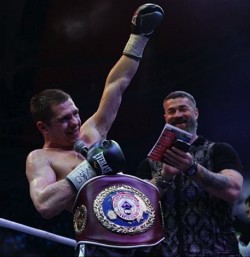 Ekaterinburg, Russia (May 9, 2016)–This past Friday night, in Ekaterinburg, Russia, undefeated WBO European Super Featherweight champion Evgeny Chuprakov made the second defense of his title, when he stopped previously undefeated Sebastian Tlatlik in the fifth round of their scheduled 10-round bout.

Chuprakov dominated the action and finally the fight was halted by the referee in the 5th round. This was the third undefeated opponent that Chuprakov has beaten, as he continues to fight top-level competition; He already has a stoppage victory over former world champion Dmitry Kirillov.

“This is a great win for Evgeny. He stopped an undefeated fighter, and now we are looking to bring him back to the United States and put him in a meaningful bout. He has proven that he is a contender at junior lightweight, and we hope to have him back in the ring in August,” said Banner Promotions President, Arthur Pelullo.