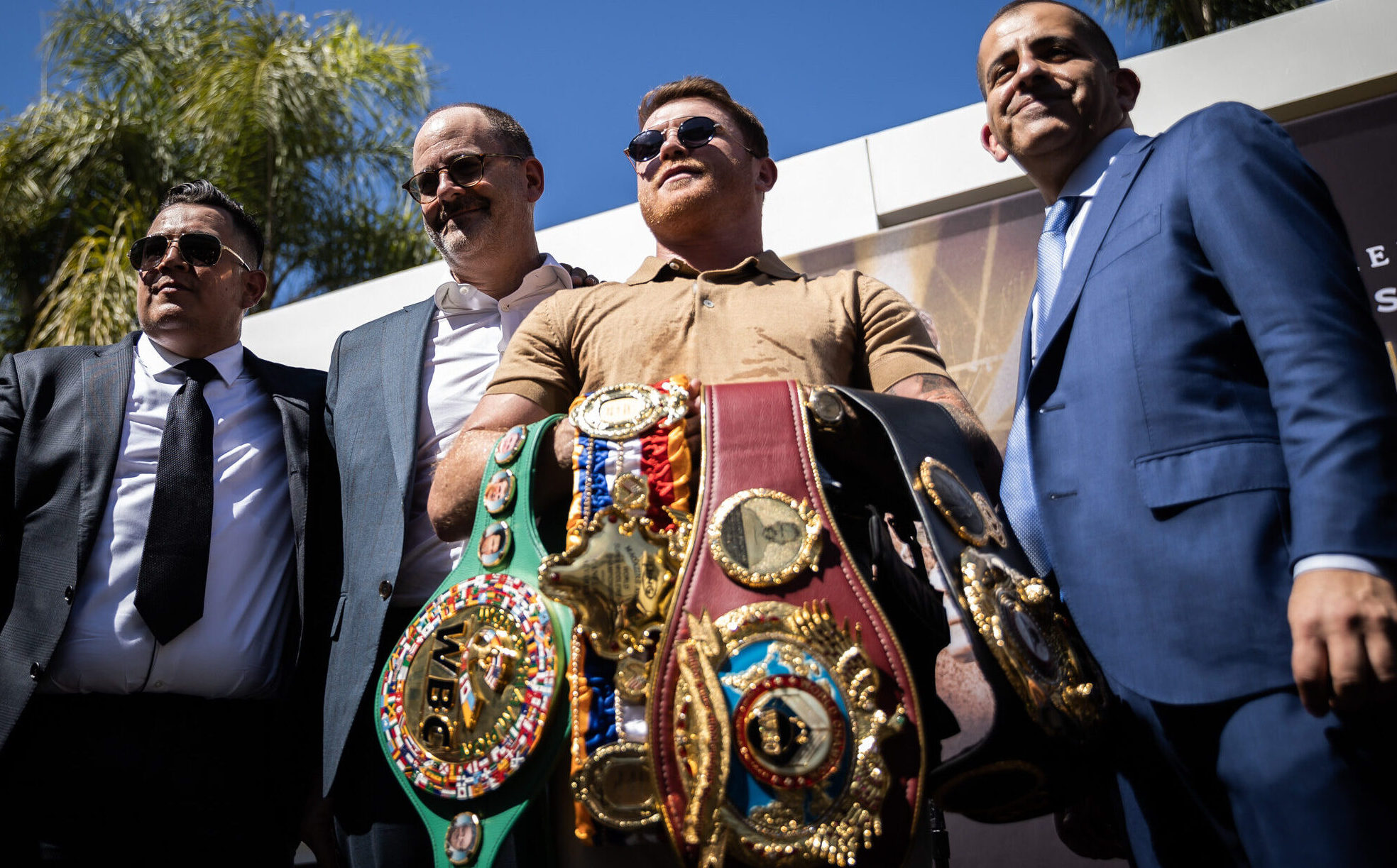 During an extended face-off that kicked off the event, the fighters exchanged words and threw glancing blows before their respective teams rushed the stage to separate the combatants, escalating a rivalry that will culminate on fight night in just over six weeks.

Canelo and Plant will battle on Saturday, November 6, live on SHOWTIME PPV at the MGM Grand Garden Arena in Las Vegas in a Premier Boxing Champions event, with the winner stamping his name in the history books as the first undisputed 168-pound world champion of the four-belt era.

Tickets for the live event are on sale now and can be purchased at AXS.com. The event is promoted by Canelo Promotions and TGB Promotions and sponsored by Hennessy and Value. Eddy Reynoso, Canelo’s trainer and manager, and Justin Gamber, Plant’s trainer, joined their fighters on stage at the event in Beverly Hills. Here is what the press conference participants had to say Tuesday:

“You are not on my level and you will see on November 6. You don’t want to fight now, I promise you.

“We come from nothing and we worked hard to be here. For somebody to lie and talk trash about us, that upset Eddy. It is what it is though. We just have to show everyone who we are on November 6.

“Caleb might be on the same level as Billy Joe Saunders and Callum Smith, but he’s not on my level. I respect that he isn’t here to back down. You can see from today that this is definitely going to be a good fight.

“I know what I need to do and I know a lot about him. He’s a good fighter but I know my skills. My experience is going to give me the edge in the fight. I have faced similar styles to Caleb’s against Floyd Mayweather, Erislandy Lara, Austin Trout and Saunders.

“He’s an insecure person and that’s why he came with a lot of excuses about lots of things. I don’t care about it though. I’m just going to do my best on November 6 and win the fight.

“To be undisputed is history for Mexico and for everyone on my team. To be the undisputed champion is just a great thing for my career.

On the on-stage scuffle: “You can say whatever to me, but not to my mom. I’m going to fight anyone who says something about my mom. And he swung first. I just pushed him. He swung first, and I do what I do. He crossed the line.

“It will be over in eight rounds or less. I’m going to knock out this guy. Easy.”

“I know only one thing better than proving people right, and that’s proving people wrong. I’ve been doing that my whole life. As soon as I stepped on the stage, people started talking about what I can’t accomplish and what I can’t do. Where I come from, there is no boxing community. There was no other pro I could look to and say that if he can do it, then I can do it. All I had was my mind and my heart.

“I don’t do this to be famous or to get attention. When I first started, it was just me and my dad. No one thought I’d be standing here today. I can remember him and my grandfather scrounged up a little bit of money to open a little boxing gym. There was just one heavy bag hanging in the corner. But when you really want something, you don’t need all the fancy things. You just need your mind and your heart.

“I know that people don’t believe me when I tell them I’m winning on November 6. All those people who tell me that I can’t do something, you live believable lives and you do believable things. I promised myself that I was going to run this all the way to the top, with no problem crashing and burning along the way. I set out to live an unbelievable life and accomplish unbelievable things. Those people who doubt me are the very reason that I’m here.

“Miguel Cotto’s brother can make you do the chicken dance but I can’t? Okay. Mark my words, on November 6 you will hear the words, ‘And the new undisputed super middleweight champion,’ but you will also hear the words, ‘and still undefeated.’

“Being undisputed would mean a lot. I’ve sacrificed so much to this sport and I’ve been doing this a long time. All that work would come down to one moment. I want my name in those history books and that’s the only reason that I’m here.

On the on-stage scuffle: “We just had some normal back-and-forth banter up there and then whatever happened, happened. It’s none of my concern though. I’m focused and locked in on November 6.”

“I’m a little upset by how things turned out today, but in the end we will settle things in the ring on November 6.

“The offensive language is what offended us the most. We are respectful people, and we move forward from this with our heads held up high. Now we are going to train well, win the fight and see what comes next after that.

“There are a lot of people who say things on social media but then they don’t show up. Some people want to take down a whole country and a great athlete that represents his country. They talk a lot of trash. You need to work hard though. You need to have guts to work as hard as we do.”

“I want to thank our whole team for believing in us and getting us this fight that we wanted and this opportunity to make history. It’s been blood sweat and tears, literally, to get here. It’s been a long journey. This fight is not about money, it’s about legacy.

“In 1996, when I was 15-years-old, my favorite fighter was the IBF Super Middleweight World Champion Roy Jones Jr. Every fan back then craved an undisputed champion at 168-pounds and now I train the IBF champion and we’re going to be fighting for all of the marbles.

“Tune in on November 6 and you will see the first undisputed super middleweight champion of the world and he’s from Tennessee. Anything that happened today at this press conference is going to drive us and give us more hunger.

“It took a couple of tries, but here we are today with the undisputed super middleweight championship on November 6. It’s a real pleasure to be working with our network partners at SHOWTIME for this event. SHOWTIME has a long history of being involved in the sports’ biggest and most important events and that continues with this fight.

“It’s an honor to be working with the pound-for-pound king Canelo Álvarez, Eddy Reynoso and everyone with Canelo Promotions. I’m also thrilled to be back working with everyone on team Plant. I promoted Caleb’s pro debut in 2014 and it’s great to see him up here today in this position.

“Canelo holds three titles, while Caleb owns the fourth title in the 168-pound division. They’ll battle to become the first undisputed champ in the four-belt era. History will be made on November 6 at the MGM Grand Garden Arena in Las Vegas.”

“2021 has been a phenomenal year for SHOWTIME Boxing. It’s one of our most prolific years in recent memory. SHOWTIME has delivered 17 live boxing events so far this year, with several more to come. Eight world championship fights, multiple world title unifications and now two fights for the undisputed title as a very good year for SHOWTIME becomes a great year for SHOWTIME. SHOWTIME is the home of big fights. It’s the most trusted and longest-tenured network in boxing. There is no other network making a more meaningful or more significant commitment to the sport of boxing. We are the home of boxing’s biggest and best fights.

“We are proud to welcome Canelo Álvarez back to SHOWTIME. We also welcome Caleb Plant for his SHOWTIME debut. It was almost nine years ago – September 15, 2012 – that Canelo made his debut on SHOWTIME in a thrilling fight against Josesito Lopez. Nine years is a long time. That was a very young Canelo Álvarez and a very young Eddy Reynoso. That started an impressive run of fights in which Canelo demonstrated his willingness, desire and demand to take the toughest fights available. Together back in 2013, we set a record at the time for the biggest pay-per-view of all time as we helped launch Canelo as boxing’s newest pay-per-view star. Now nine years later, we are proud to welcome him back for this mega fight.”