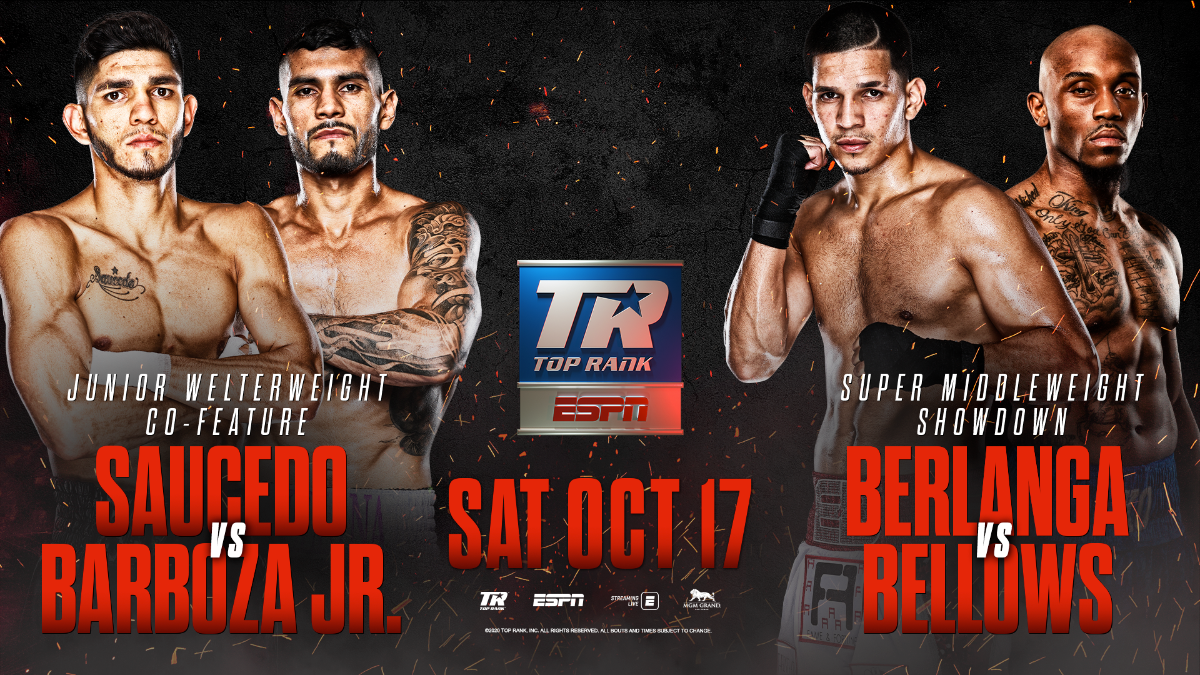 In the 10-round junior welterweight co-feature, for the vacant WBO International Jr. Welterweight title Alex Saucedo Vs. Arnold Barboza, Jr.

“Lomachenko-Lopez promises to be a classic, and the rest of the ESPN-televised card will set the table,” said Top Rank chairman Bob Arum. “Barboza and Saucedo are players in the deep junior welterweight division, and both men are ferocious competitors. The winner is ready to challenge for a world title. As for Edgar Berlanga, every time he steps in the ring, he impresses me more and more. I haven’t seen a young puncher like him in quite some time.”

Saucedo (30-1, 19 KOs), the thunderous slugger from Oklahoma City, has won a pair of fights since falling short to Maurice Hooker in a November 2018 bid for the WBO junior welterweight world title. He is entering his third bout with head trainer Pedro Neme, a union that has paid dividends thus far. Saucedo knocked out Rod Salka in the first round last November and made his “Bubble” debut June 30 with a one-sided decision over Sonny Fredrickson.

Barboza (24-0, 10 KOs), from South El Monte, Calif., is a seven-year pro who is ranked in the top 10 by the WBO and WBC at 140 pounds. He graduated from prospect to contender with victories over the likes of Mike Reed, Mike Alvarado and William Silva. He last fought Aug. 29 as the co-feature to the Jose Ramirez-Viktor Postol junior welterweight world title bout and cruised to a one-sided decision over Canadian veteran Tony Luis.

“Arnold is a very versatile fighter, so we are preparing for everything,” Saucedo said. “I know it will be hard to steal the show from Lomachenko-Lopez, but I’m coming in to put on a memorable fight for the fans. I feel like people still doubt me from the Maurice Hooker fight, and I can’t wait to show everyone all of my tools.”

“This fight, and fighting on such a significant card, means the world to me,” Barboza said. “It’s time to put the 140-pound division on notice. I respect Saucedo, but he’s in my way as I strive to earn a world title opportunity.”