Pacquiao and Algieri face off in Macau 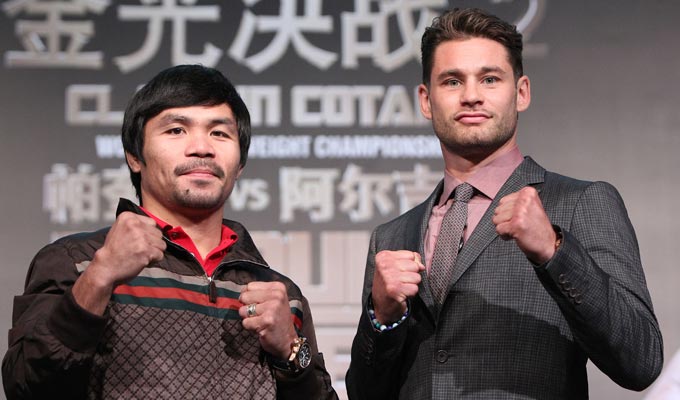 “This fight is going to be a good fight,” promised Pacquiao. “Algieri is undefeated, he’s a good boxer, I saw his last fight with Ruslan. He took a lot of punches but he’s a very tough boxer and fought back…my opponent is tough and I like that. The last fight that we had here with Brandon Rios we did a good job, but Algieri’s different than Rios. He’s faster than Rios, he’s taller than Rios, so it will give me a hard time.

“It’s been a long time that the fans of Manny Pacquiao have been expecting a knockout. This fight I’m going to try to do my best to make the fans happy and if the knockout comes it’ll come, but what I’m trying to do is focus and win the fight.”

Algieri was very gracious toward the Pacquiao Team for accepting the fight and stated he deserved this chance. “I earned the right to be here,” said Algieri, who is significantly taller than Pacman. “I bled for this. I trained for this my whole life. This opportunity means the world to me. I’m going to prepare myself the best I possibly can…I will give it my absolute all, just like I showed in my last fight and every fight before that.”

Pacquaio’s trainer Freddie Roach said Manny’s training camp will be held in General Santos City, Philippines. “I know Chris has a master’s degree,” commented Roach. “But Manny has a Ph.D in boxing.” WBO welterweight champion Manny Pacquiao and WBO jr welterweight champion Algieri will announce their November 22 world championship fight during a two-week 27,273-mile international media tour, which kicked off Monday with a press conference at the fight location, The Venetian Macao. The tour will include stops in Shanghai, San Francisco, Las Vegas, Los Angeles and New York. The event will be produced and distributed live by HBO Pay-Per-View beginning at 9:00 p.m. ET / 6:00 p.m. PT. If you plan on attending live, tickets go on sale to the public at 10 a.m. August 29 (details later in this report).

Manny Pacquiao: “Chris Algieri fought an exceptional fight in June to win the world title from Ruslan Provodnikov. I am impressed and intrigued by his scientific approach to training and boxing. He may be the smartest and the fittest athlete I have ever faced and that makes him the most dangerous. I worked hard to reclaim my welterweight title and I will work harder to make sure I keep it on November 22. As always, I dedicate this fight to my fellow Filipinos around the world and to bring glory to the Philippines. ”

Chris Algieri: “It is a real honor to fight a future Hall of Famer like Manny Pacquiao and I am looking forward to being introduced to a whole new market and fan base in the Far East. My last fight against Ruslan Provodnikov got the world’s attention, now I am going to show what I can really do. I have the utmost respect for Manny and his great team, but make no mistake — I am here to win and I have nothing on my mind but beating a legend.”

Pacquiao Trainer Freddie Roach: “I underestimated Algieri when he faced Ruslan Provodnikov in June but I won’t make that mistake again. I hope he understands that this is a fight and not a marathon. Algieri is going to face the best of Manny Pacquiao because Manny is going to have his toughest training camp ever. I am looking forward to a great fight and Manny’s finest hour on November 22.”

Algieri Trainer Tim Lane: “Over the past 14 years I have trained and watched Chris become a Master of the Art of Boxing. His hard work ethic, discipline and dedication are second to none. Chris has been in the gym after only one week off from his last bout with New York trainers Keith Trimble, Dr. Mike Camp and Tony Ricci who have kept him in great shape through the years and continue to help him get stronger and faster between and during all camps. Training camp will officially start in late September in New York and finish in Las Vegas before leaving for China. Let it be known, there is a New ERA in the world of boxing and on November 22. Chris Algieri will once again Shock the World and become the New WBO Welterweight Champion!”

Hall of Fame promoter Bob Arum: “The battle between the two world champions will be a fantastic fight. Manny’s non-stop attack style will be challenged by Algieri’s laser-like punching.”

Algieri’s promoter Joe DeGuardia: “It has been a great year. In February we had Chris at The Paramount on ESPN, in June on HBO winning the World Championship at Barclays Center in dramatic fashion against the feared Ruslan Prodvodnikov. Now we are excited to announce that he will be at The Venetian Macao against legendary Manny Pacquiao on HBO Pay-Per-View. It has been an unprecedented meteoric rise that will continue on November 22. I look forward to this intriguing and ‘landscape-changing’ fight.”

Edward Tracy, President and Chief Executive Officer of Sands China Ltd: “Sands China is thrilled to be bringing Manny back to Macao again to fight at the Cotai Arena this November. Since Manny’s sold-out Venetian Macao debut in November 2013, we’ve worked continuously with Bob Arum and Top Rank to host three more successful boxing cards at the Cotai Arena and two live screening events of US cards; and further, announced our partnership on the mainland China television program ‘Fist Power – Fight to Win.’ We’re happy to see these events helping promote the growth of boxing in the region while raising the profile of Macao as a world centre of tourism and leisure.”

Mark Taffet/HBO Pay-Per-View: “Against all odds, Manny Pacquiao has produced a brilliant, Hall of Fame career. He’s accepted challenges around the globe and established new frontiers, including fighting on pay-per-view from Macao. Now another young, talented and unassuming prizefighter named Chris Algieri will try to defy the odds and fulfill his dreams by challenging Pacquiao for his welterweight crown. In Chris Algieri, fight fans see a great American story with added intrigue based on the heart and courage he displayed in his recent victory over Ruslan Provodnikov.”