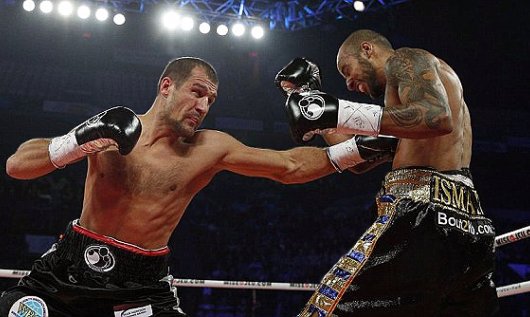 A QUARTER of a century after Jeff “Hitman’’ Harding scored one of the greatest upsets ever in world championship boxing in Atlantic City, another raw-boned Aussie, Blake Caparello, is confident he can create his own piece of history there next week.

Like Harding against the fearsome, rock-faced Dennis Andries, Melbourne’s unfancied Caparello will fight for a version of the world light-heavyweight title against one of the most dangerous sluggers in the fight game.

The bout takes place at the Revel Resort beside the Atlantic Ocean, just a couple of kilometres from the Atlantic City Convention Centre where Harding, behind on points, knocked out the WBC world champ in the last round in 1989.

Caparello, 27, a carpenter who grew up in Greenvale and attended St Bernard’s College in Essendon, is undefeated in 20 pro fights but will be a heavy underdog against Russia’s WBO champion Sergey Kovalev, who has 24 wins, 22 by KO.

Back in 1989 I was part of Harding’s team in Atlantic City when the Johnny Lewis-trained fighter rose from the canvas and, with two black eyes closing up around his broken nose, scored a heart-stopping knockout in the last round to take the WBC title.

Few fights involving an Australian have been so intense and dramatic.

Harding’s victory was all about brute strength and an indomitable spirit. He took heavy punishment throughout the fight before his stunning fightback against the West Indian-born British bulldog.

Caparello has a chance to score an upset of similar proportions on Sunday week but it shapes as a far different contest to Harding and Andries 25 years ago.

While Harding was all brawn and brute strength, Caparello is an artist as difficult to fathom as the Continental shelf. He’s a tall rangy southpaw who befuddles and bewilders his opponents instead of battering them.

He’s quick and slick, able to score punches from unusual angles and if he fights at his best can frustrate and confuse the heavy hitting Russian.

He and his trainer Sam Labruna have worked on a number of contingencies for whatever bombs Kovalev hurls their way.

“There’s no pressure for me,’’ Caparello told reporters this week.

“All the hype is about Sergey, so the pressure is on him. I feel fitter, stronger and sharper then ever.

“The good thing about my style is I can adapt to any styles and anything he brings on fight night. I’m very confident because I’ve put in the hard work.’’

No one has ever gone beyond eight rounds with Kovalev, 31, but the Russian gives Caparello plenty of respect.

“Blake is undefeated,’’ Kovalev says. “I am taking him serious. Blake has an advantage because he is coming to get the title. He is hungry and has nothing to lose. It is my job to keep the title.’’