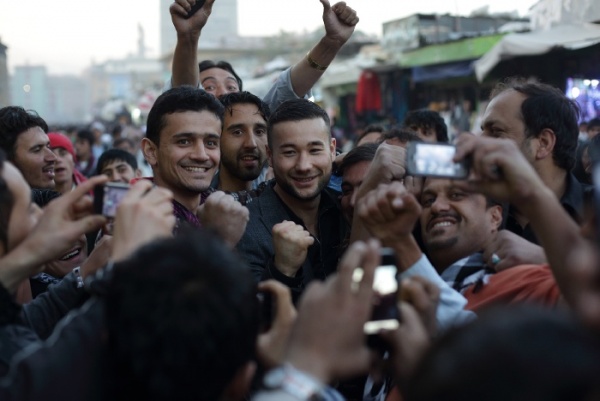 Afghan fighter Rahimi overcame Mbelwa on Tuesday evening to take the World Boxing Organization Intercontinental middleweight belt in the “Fight 4 Peace” in a city better known for gunfire and insurgent attacks than uppercuts and jabs.

Organisers hope to use the event, which drew around 1,500 people paying at least $100 for a ticket – more than a month’s salary for most Afghans – to promote sport as a unifying force in Afghanistan after decades of conflict.

“This bout will give a lesson to the Taliban and other opposition of the government to stop fighting with weapons and that they can start fighting for power without violence,” said 28-year-old Mohammad Asif Sahibi as he watched.

During their five years of rule in Afghanistan the Taliban, bitterly opposed to sport and entertainment, outlawed boxing as un-Islamic, but later allowed limited-contact fighting which prohibited strikes to the face.

Tuesday’s contest, during which Rahimi’s every swing was roared by a partisan, flag-waving crowd, began after a mullah recited verses from the Koran, a solo footballer showed off ball trickery, and martial artists staged a display of Thai boxing.

“Its aim is to change people’s minds in order to keep them away from war and enmity,” said Rahimi supporter Attah Mohammad Yousufzai, a finance manager for a logistics company in Kabul.

“It aims to show them how to fight and still love each other.”

Rahimi took the belt on a technical knockout which ended a contest of few cleanly-landed punches, staged in a huge tent normally used for national gatherings of tribal elders but rigged with Las Vegas-style lights and a techno-pumping sound system for the bout.

“Today it’s a start,” Rahimi said after the fight. “This belt is not mine, this belt is Afghanistan’s, it’s yours. I love you.”